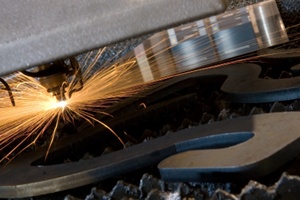 IPG Photonics, the market-leading fiber laser specialist, has posted second-quarter revenues of $67.3 million, thanks to robust demand from China and for materials processing applications in general.

That figure exceeded the company’s previous expectations, while a further significant increase is anticipated in the third quarter - despite what CEO Valentin Gapontsev described as “underlying uncertainties in the global macroeconomic environment”.

For the immediate future, those macroeconomic uncertainties are not having any impact on IPG's business, with revenues from Chinese customers tripling in size since the second quarter of 2009.

“With new greenfield builds [in China], fiber lasers seem to be the preferred light source for materials processing applications,” Gapontsev said. “We haven’t experienced a slowdown in the Chinese economy and the demand for our products is robust.”

The CEO added that although some competitors were now trying to enter the fiber laser market, IPG was under little threat of losing market share to them because they are so far behind IPG in developing fiber laser technology:

“[This] will only benefit IPG’s sales,” he said. “IPG has pioneered the field of fiber lasers for high-power applications in metal processing for almost a decade and with competitors only now turning their attention to this opportunity we believe this will help validate the commercial market opportunity and help IPG distinguish itself with superior product offerings versus the potential competitors.”

But that situation looks certain to change. Sales of pulsed fiber lasers in particular are growing quickly at IPG, with unit sales tripling in size compared with the second quarter of 2009. Shipments of high-power lasers doubled over the same period, thanks to demand for cutting, welding, engraving and marking applications.

Gapontsev also highlighted some recent product development on green lasers. Pulsed versions of the technology are now in early-stage tests with potential customers in the solar industry, while continuous-wave versions are in the final stages of IPG's internal assessment and expected to be with initial customers by the end of this year.

With the company expecting to post a further increase in sales to between $69 million and $75 million for the third quarter of the year, the only potential problem facing IPG in the near future is an upcoming trial over patent litigation between it and competitor IMRA America.

That trial is scheduled to begin on August 24, while IPG has now settled a separate case with CardioFocus, a company that makes endoscopic laser ablation systems for medical applications.