Longbow Research sees causes for concern, but expects the photonics market to outperform GDP in the long term. 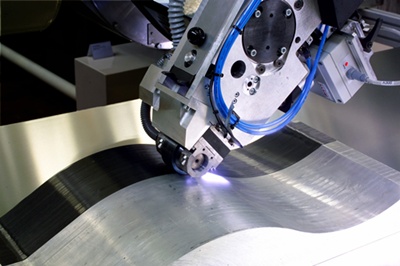 An outbreak of cautious optimism in optics and laser markets is fueling the hope that the economic slowdown may be over. Not all vendors are cheerful however, with the order books of some in the materials processing sector continuing to take a beating, and the mixed signs of recovery in the US economy casting a long shadow.

The top-level signs are certainly encouraging: 69 percent of US vendors surveyed by analysts at Longbow Research, Ohio, reported an increase in demand for Q2 2010, a dramatic increase from the 40% who could say the same after Q1. The number reporting a decrease in demand for their products during the quarter fell from 40% to just 15%.

Inevitably, those positive signs are not evenly distributed. The news was good from the automotive industry, where investment in laser equipment was on the rise at both Ford and General Motors, according to Longbow's intelligence. Figures from the medical and defense sectors are also headed in the right direction.

"Much of the varied pattern stems from markets that had already been declining prior to 2008, such as the semiconductor equipment and automotive sectors," commented Longbow’s Mark Douglass. "These subsequently saw very low troughs, and were probably under-producing compared to real demand. So now they have been able to rebound faster and harder, relative to other industries."

Medical devices
Demand for medical devices resisted a sharp drop off in the first place, since the growth drivers in the sector are less susceptible to wider economic variations - people still require treatment. "Medical devices are constantly undergoing innovation, and their miniature size lends itself naturally to laser-based manufacturing," said Douglass. "A mix of equipment for health & beauty treatments and for the manufacture of precision medical devices has kept the sector buoyant."

Defense was similarly bolstered by US government spending, where a commitment to developing new surveillance techniques rests heavily on lasers and photonics technologies. 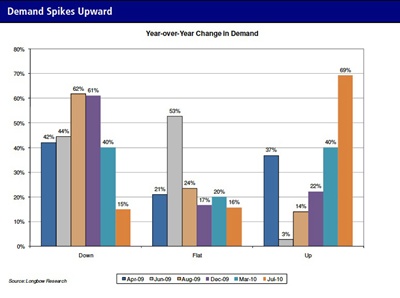 In the optical components sector, increased laser OEM activity has naturally been good news. So too is the relative health of manufacturing output, and the uptick in industrial production recorded during the first half of 2010 has fed through into a strong second quarter for component suppliers. Discounted prices forced by a competitive environment are still "a tough pill to swallow in light of the substantial increases in raw materials prices," noted Douglass.

The news is not so good for vendors of high-power laser cutting systems, where Douglass believes sales have remained anemic for two reasons: "Capacity utilization rates are still relatively low, so companies need to use up excess machine capability before they invest in new equipment. In addition, even those companies that have growth opportunities, many of which are small fabricators, do not have access to the credit needed to finance the purchase of an expensive laser cutting machine tool."

Some vendors in this sector have even reported plateauing demand during the quarter, a potentially worrying sign.

Rates of recovery
Meanwhile, vendors of lasers and optics in all sectors watch the various rates of recovery in the rest of the world with some concern. The Eurozone PMI (Purchasing Managers Index, a good measure of general economic health) decreased slightly to 55.6 in June from 55.8 in May, indicating that EU industrial production is still expanding but that the rate of increase has slowed. In comparison, the United States' own PMI fell to 56.2 in June 2010, having reached 59.7 in May.

China’s PMI continues to contract, falling to 50.4 in June and now dropping faster than the rest of the world, as China’s government implements mechanisms to prevent its economy from overheating. 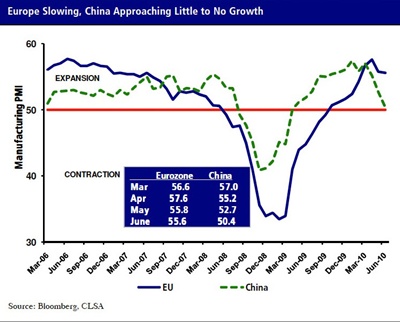 "Earlier this year it seemed that renewed activity in the US and China might compensate for a slow recovery in Europe, although now it's China and the US that are more worrisome," said Douglass. "But the application base for photonics is so broad that there will always be pockets of strength. Many of the larger European laser companies, such as Trumpf or Rofin-Sinar, are significant exporters out of the Eurozone, so a sustained European recovery is not necessarily essential for them."

Some vendors are hoping for emerging markets such as India to become significant purchasers of equipment, and believe they can compete against Chinese machinery despite carrying a significantly higher price tag.

"Experienced machine builders in the US and Europe have a lot of application know-how and can win bids against Chinese competitors, despite the China-made products being 30% or even 40% cheaper," said Douglass. "We would expect the quality from the Chinese suppliers to improve over time, but there is plenty of opportunity for companies to export products to China and India and still make money."

Purchasing intentions
The trade show circuit begins in August, providing a barometer of customers’ purchasing intentions for the rest of 2010 and into 2011. Many vendors will sigh with relief, although most will do so in the hope that volumes are unlikely to fall further rather than an expectation of any increase. Machine builders may have to tread water for several more quarters.

Longbow’s causes for concern form a substantial list: "The return of business uncertainty over a 'double dip' recession, continued weakness in housing markets, falling consumer confidence, higher taxes, sharp escalations in health care costs due to the recent health care bill in the US, weakening of China's economy, and of course the sovereign debt crisis in Europe will all greatly limit further investments in 2010," concludes Douglass. "Lasers and photonics should still be able to outperform GDP in the long term, but that does require GDP numbers to begin moving again."