Laser co-inventor Charles Townes and US Secretary of Energy Steven Chu are to receive awards at the ICALEO show in September. 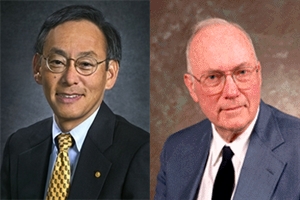 The Laser Institute of America (LIA) will present its first ever lifetime achievement award to Charles Townes later this year.

As one of the key pioneering minds behind the development of the laser 50 years ago, Townes is no stranger to awards – notably picking up the Nobel Prize for physics in 1964 and the IEEE Medal of Honor in 1967.

Townes, now 94 years old, is scheduled to make a special address at the LIA’s 29th International Congress on Applications of Lasers and Electro-Optics, which takes place in Anaheim, California, from September 26.

Also set to speak at the annual event is Steven Chu, the US Secretary of Energy, to whom the LIA have decided to present their Arthur Schawlow Award.

Schawlow, who died in 1999, shared a patent for the laser with Townes, and also nominated Chu for the Nobel Prize for physics while the two were colleagues at Stanford University. Chu went on to become a Nobel co-laureate in 1997, for the development of methods to cool and trap atoms using six separate lasers.

At this year’s ICALEO, there is an emphasis on the role that lasers can play in economic recovery and environmental clean-up.

Sessions include high-brightness laser development, hybrid laser welding and laser drilling, with the laser microprocessing part of the event kicking off with a session on ultrafast applications for industry.