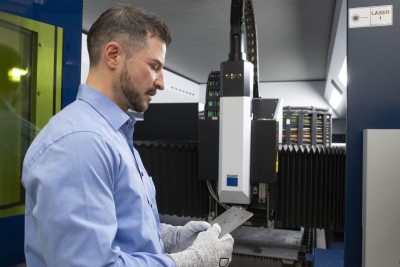 Engineering and laser giant Trumpf will showcase a new laser-cutting technique at its INTECH in-house trade show, to be held from May 17 to 20, 2022.

Offering improved efficiency and more reliable processing, the “nano joint” method holds parts in place using tiny supporting tabs that are created at points where the laser does not cut all the way through the sheet, explains the firm’s launch statement.

These tiny tabs, or nano joints, prevent the metal from shifting or tipping while the laser is cutting parts.

Product manager Patrick Schüle commented, “Users can improve the reliability of their laser-cutting process and make several of the steps in the process more efficient. Nano joints reduce costs and material usage by allowing users to nest parts closer together and minimize how much metal remains in the skeleton.”

Depending on the shape of the specific parts, users may even be able to nest parts in a way that eliminates raw material waste completely. Nano joints also make it quicker and easier for workers to break parts out of the nest.

The firm will offer nano joint technology on its TruLaser 5000 fiber, TruLaser 3000 fiber and TruLaser 1000 fiber series machines. The technology can be retrofitted to existing machines by means of a software update.

Currently, fabricators typically hold cut parts in place during laser cutting using tabs known as micro joints. Workers then break these tabs when they remove the parts from the nest. In contrast, nano joints speed up the process because it is quicker to produce tiny retaining points rather than conventional micro tabs during cutting, the company says.

The new joints also allow the operator to break parts free from the nest with less effort. In most cases, nano joints eliminate the need for finishing work, since the mark they leave when the parts are broken free from the nest is barely visible. In contrast, micro joints leave much more obvious contour damage which subsequently has to be manually corrected by production staff.