...and europium is key to novel optical quantum processing approach by European group. 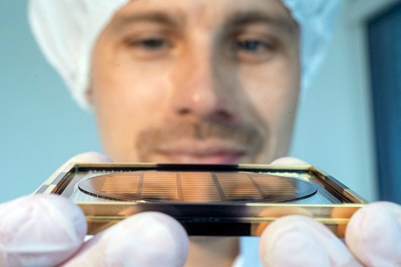 A wafer from which photonic chips are cut.

A consortium led by quantum start-up Q.ANT is set to receive €50 million in research funding. Approximately €42 million of this will come from the German Federal Ministry of Education and Research, while the consortium partners will contribute around €8 million.

By creating highly specialized optical channels on silicon chips, this photonic chip process is able to transport, control and monitor quanta with virtually zero loss, even at room temperature. In future, say the developers, this will also enable the chips to be used in conventional mainframe computers.

“This funding is a clear indication of Germany’s strength as a hotbed of innovation. We’re on the cusp of the quantum computing era, and the global race to secure market share in this future technology has begun. The funds that have now been earmarked for this research alliance are a key enabler on the path toward building quantum computers in Germany,” said Q.ANT CEO Michael Förtsch.

Known as PhoQuant for short, the research project will run for a total of five years. Q.ANT is in charge of the industrial side of the consortium, which also includes 14 other German companies, applied research institutions and universities. 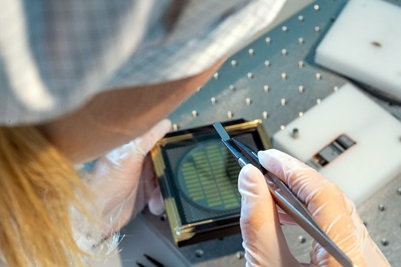 Preparing a photonic chip for the next step in the process.

Förtsch added, “If we want to achieve the goal of German-made quantum computer chips – plus all the jobs that would involve – we need to get top-class researchers and companies working together. The only way to harness Germany’s expertise as a major player in the world of science and research and transform it into successful industrial products is by fostering close cooperation between businesses, universities and applied research institutions.”

The project partners hope to present an initial prototype within two-and-a-half years, and they aim to produce a quantum computer chip that can perform large-scale calculations within five years at the latest.

“Over recent years and decades, we’ve carried out some of the world’s most pioneering basic science work in this area of research. For the first time, this project gives us an opportunity to put the results of this work into practice through demonstration set-ups,” said Prof. Christine Silberhorn from Paderborn University.

The PhoQuant project is part of the framework program “Quantum technologies – from basic research to market”, financed by the German Federal Ministry of Education and Research. A key organization participating in the project is the Jena-based Fraunhofer Institute for Applied Optics and Precision Engineering (IOF).

“Researchers in Jena are working on a number of developments within the scope of this project, including integrated optical quantum light sources and low-loss integrated optical and fiber-optical interferometers as the basic building blocks of photonic quantum computers,” said Prof. Andreas Tünnermann, director of Fraunhofer IOF.

“This requires expertise not only in quantum optics and photonics, but also in hybrid packaging and interconnection technology. We’ll be injecting these skills into this highly dynamic project and working with all the participating companies and institutions to reach our common goal of creating a powerful photonic quantum computer.” 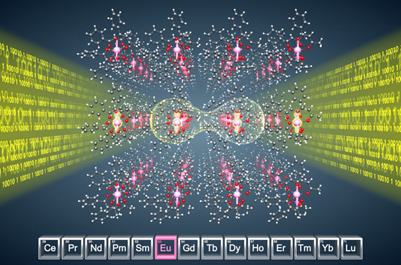 In another quantum-photonics development, researchers from Karlsruhe Institute of Technology (KIT), Strasbourg University, Chimie ParisTech and the French research center CNRS have achieved what they call “major progress in the development of materials for processing quantum information with light.” In Nature, they present a europium molecule with nuclear spins, by means of which an effective photon-spin interface can be produced.

“For practical applications, we have to be able to store, process, and distribute quantum states,” commented Professor Mario Ruben, Head of the Molecular Quantum Materials Group of KIT’s Institute for Quantum Materials and Technologies and of the European Center for Quantum Sciences at Strasbourg University.

“We have now identified a promising novel type of material: A europium molecule containing nuclear spins. Europium belongs to the rare-earth metals,” he added. The team of Professors Mario Ruben and David Hunger from the IQMT and Dr. Philippe Goldner from the École nationale supérieure de Chimie de Paris developed this innovative material.

The molecule is structured such that it exhibits luminescence in case of laser excitation. This means that it emits photons carrying the nuclear spin information. By means of specific laser experiments, an effective light/nuclear spin interface can be produced. The work covers the addressing of nuclear spin levels with the help of photons, coherent storage of photons, and the execution of first quantum operations.