By Matthew Peach, in Manchester 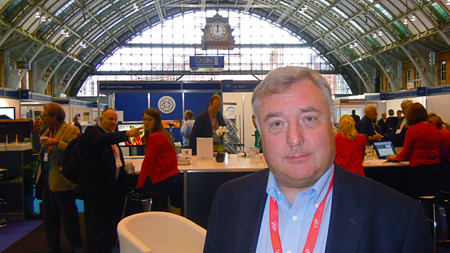 This year’s EMC event was organized by the Royal Microscopical Society (RMS) in co-operation with the European Microscopy Society, under the umbrella of the International Federation of Societies for Microscopy.

Prof. Tony Wilson, RMS president and vice chair of the event symposium, told optics.org, “The conference sessions have provided an unparalleled opportunity for delegates to immerse themselves in their own area of interest, but also to witness new techniques and tools that might benefit their current work, or feature in their future activities.”

Wilson added that the high attendance and enthusiasm for the event was “a dream come true for the Royal Microscopy Society”. Traditionally, the European Microscopy Congress series of meetings has focused on in electron microscopy with little attention paid to optical microscopy and topics such as live cell imaging. But this year it has been all change at Manchester Central, a former great railway terminus. 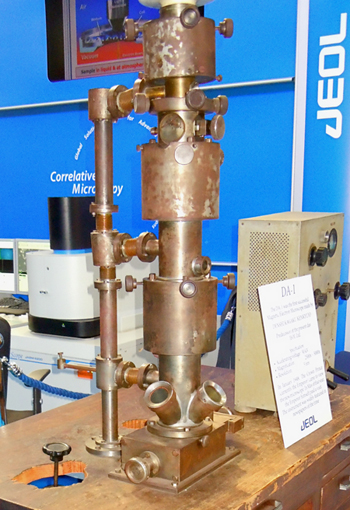 “There has been a tremendous rebirth of interest in optical imaging in the past few years, imaging living specimens quickly and without harm. Scientists in biological fields have realized that it’s terribly artificial to put a specimen on a microscope slide. Developing techniques, such as are exhibited here, to take the microscope to the live specimen, to take that to a live rat or mouse, shave its head and look at processes in vivo may be hard to do but it is clearly the way forward.”

“What we have tried to do here in Manchester is marry the two technologies of optical and electron scanning microscopy. The RMS has run a meeting like this every two years on our own with a smaller exhibition than this but with this development of EMC 2012 we have been able to bring the LM and EM people together and the buzz around the exhibition is very positive. Some of the 150 or so exhibitors are now saying now that if they had realized it would be as busy this they would have brought more products to show."

The happy accident that brought the event to Manchester was the Olympics in London, which meant that a London venue was not bookable. Wilson added, “Manchester Central, meets our needs for exhibition, conference and being located in a great city centre. We will be organizing another event like this in 2014 and from what I can see now, Manchester is a great venue.”

Wilson said it was difficult to pick out particular highlights from the packed five-day conference but that the plenary sessions had all been very interesting and well attended. These included:

Making light work in microscopy, by Tony Wilson, himself (Oxford University), What is the future of nanotechnology?, by Peter Dobson (Oxford University), Imaging the connectome, by Jeff Lichtman (Stanford University), Observing membrane proteins in ice and water, by Andreas Eagel (Case Western Reserve University), The STEM multi-signal approach: learning the most from your nano-object, by Christian Colliex (CNRS Electron Microscopy Group at Solid State Physics Laboratory, Orsay), Intravital events that pattern embryonic development, by Scott Fraser (California Institute of Technology), and The role of TEM in the discovery of quasi-periodic crystals, by Dan Schechtman (Technion-Israel Institute of Technology), who was also Chemistry Nobel Laureate 2011.

Tony Wilson is President of the Royal Microscopical Society and General Editor of the Journal of Microscopy. His research in optical microscopy has the overall aim of developing a variety of high resolution imaging techniques for applications in areas ranging from the life sciences to industrial metrology.

He is also Professor of Engineering Science and a Fellow of Hertford College at the University of Oxford. He and his colleagues have introduced a number of diverse techniques into confocal microscopy such as fiber optics, laser feedback, extended depth-of-focus imaging, fast aberration free optical focusing and adaptive optics. The structured illumination technique as other ‘light efficient’ methods of obtaining optical sectioning have been commercialized from his laboratory.

Optics.org: How is the optical microscopy business performing?

Tony Wilson: In the optical field there are tremendous advances going on at the moment. One of the main developments of recent years is super resolution microscopy. One can argue whether it is technically super resolution or not, but there are various approaches that look very promising. Super-resolution techniques allow the capture of images with a higher resolution than the diffraction limit.

It seems to me that amongst some of the major companies, they have developed a super resolution system that they are marketing, possibly just to be a competitor in that marketplace because the technology is not sufficiently mature to determine which way that market will be going. In a way it’s an interesting commercial situation in that some developers seem to be putting out relatively immature technologies on purpose and watching them develop. They are all good in different ways but I suspect in the end that some of the approaches will wither away. 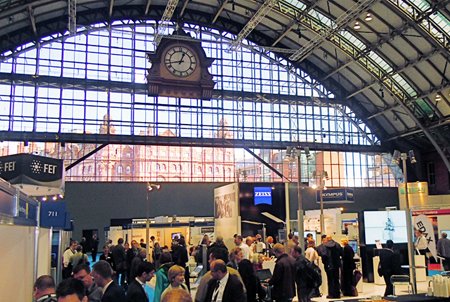 Optics.org: Why is super resolution emerging as an interesting area?

People always want to see finer structures. The finest structure you can see with a regular optical microscope is by taking an objective lens and focusing it into a diffraction-limited spot and, broadly speaking, you cannot do much better than that. Most biological specimens have fluorescent dyes, which you have to excite before you view them. If you cannot image the specimen in high resolution, then people can modify the specimen.

So there are techniques essentially employing nonlinear optical effects to inhibit the generation of fluorescence. In essence, you have two beams and one beam is a focus beam while the other beam is a super-imposed annular beam. The action of this super-imposed annular beam is to inhibit the generation of fluorescence. If you make the annulus tighter and tighter over the spot, you only excite fluorescence in a tiny area of the specimen.

Optics.org: Besides biological samples, are there other areas of interest?

All of these techniques that have been developed over recent years only work in the presence of a fluorophore, except with a technique called structured illumination. All of these things, blinking on and off, you would have to somehow label the sample. You may be able to do clever things with photoresist but my suspicion is that the industry would not like that.

Much of these super resolution effort is aimed at biology. The really tricky metrology problems in the semiconductor industry – associated with relatively deep, narrow pits and trenches – would not be addressed by optical super resolution techniques.

That is another really interesting area that some people are trying to resolve – and it’s a very hard problem because typically the pit or trench is much narrower than the spot of light. So instead, these researchers are trying to infer from what is scattered back, with wave guiding effects, what the trench is like. Some people are working very hard on that area but I don’t think it’s going to be on the exhibition floor for a while yet.