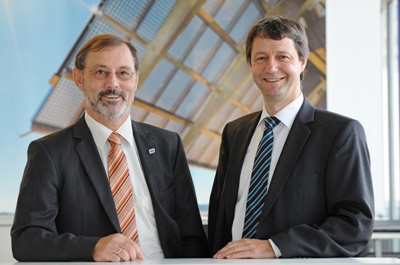 Two key figures behind the emergence of concentrator photovoltaics (CPV) as a viable energy technology have won a share of the 2012 German Environmental Award.

Worth €500,000, the award is presented each year by the Deutsche Bundesstiftung Umwelt (DBU). Described as “the most lucrative environmental prize in Europe”, it has been in existence since 1993.

All three will receive their awards next month in Leipzig, from no less a figure than German President Joachim Gauck.

Bett, who is the deputy director at Fraunhofer ISE, and heads up the “materials – solar cells and technology” division, has been instrumental in the development of the high-efficiency multi-junction cell technology upon which CPV is based. His team devised a record-breaking 41.1% efficient cell back in 2009, a mark since exceeded by US start-up Solar Junction’s current world best of 43.5%.

Lerchenmüller is general manager at the CPV company Soitec Solar, a business unit now belonging to the French semiconductor materials specialist Soitec, but which was originally an ISE spin-off called Concentrix.

In a statement, Soitec’s Gaetan Borgers, executive VP of the company’s solar energy division, said: “Andreas Bett and Hansjörg Lerchenmüller were key contributors to develop this very innovative, reliable and efficient CPV technology. Today, Soitec operates in Freiburg one of the world’s most modern production lines for manufacturing CPV modules.” The company also has more than 10 MW (peak) installed around the world, across installations in some 14 countries. 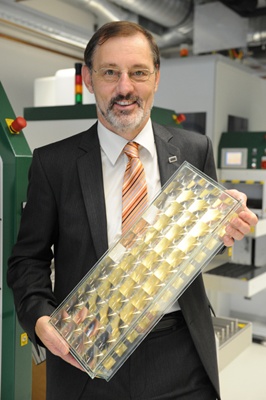 Grand plans
That installation figure currently represents a drop in the ocean when compared with the likely 30 GW of conventional PV that will be installed this year, but Soitec has grand plans to increase CPV’s footprint significantly.

The company’s Freiburg facility has a capacity of 70 MW, which is nearly enough to service the entire current CPV market demand – estimated at 90 MW (and a value of $325 million) for 2012 by IMS Research analyst Jemma Davies in a new market report.

She predicts that annual CPV demand will rise to around 1.2 GW by 2016 - a more bullish assessment than that made by Lux Research earlier this year - and Soitec is aiming to take a very large chunk of that market. The company is currently building a module manufacturing facility in San Diego, California, that is expected to have a capacity of 280 MW (peak) when completed and supply products for some major local installations.

Though Davies’ report suggests solid growth for CPV, the emerging sector is not without its problems. Amonix, widely regarded as the market leader in terms of installations, was forced to close its Nevada system factory earlier this year. That facility had a smaller manufacturing capacity than Soitec’s under-construction San Diego site, but Amonix was unable to generate sufficient orders to keep it open, saying at the time:

“Based on intense competition, the challenging solar energy equipment pricing environment and lower than anticipated demand for CPV solar energy systems in the US south west, Amonix has made the difficult decision to restructure the company and shut down its manufacturing center in North Las Vegas.”

Analysts said that Amonix had expanded too rapidly, and that has opened the door to challengers including Soitec and US-based SolFocus. Lower-tier CPV firms meanwhile appear to be experiencing mixed fortunes, with Semprius this week opening a new manufacturing facility but rival GreenVolts hit last month by the sudden withdrawal of key investor ABB.

According to the IMS report, competition will intensify in the CPV space next year, particularly as big-hitter SunPower, backed by oil giant Total, is expected to join the fray with its low-concentration PV technology. SunPower uses less efficient but cheaper solar material compared with the likes of Soitec.