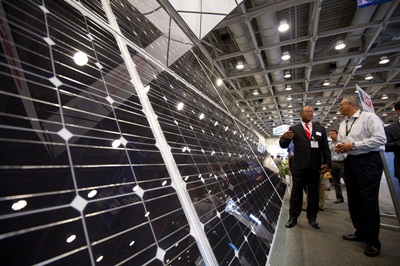 While a steady flow of formerly vaunted photovoltaics companies continue to go out of business, one firm to emerge from the crowd at last week’s Intersolar North America trade show in San Francisco was Solexel.

Based just down the road in Milpitas, Solexel isn’t exactly a start-up. It was founded - initially as “Soltaix” - in 2007, already has a pilot fab at its headquarters, and has just completed a series C round of fundraising. But if its technology is as good as it sounds, this could be one of the few companies to survive the great solar shake-out and emerge on the other side of the daunting “valley of death” now faced by any prospective PV manufacturer.

Like many that have come before, Solexel’s ‘special sauce’ involves depositing ultra-thin layers of photovoltaic material. Where it is different is that those thin films have an efficiency that is comparable with the very best crystalline silicon cells – in contrast to the variety of amorphous silicon, CdTe or CIGS structures that operate at significantly lower conversion efficiencies, but were supposed to beat crystalline silicon on cost.

Solexel’s disruptive approach relies on epitaxy, the technology that is used by LED manufacturers to deposit the thin layers of light-emitting semiconductor materials onto wafer substrates that are then diced into individual chips. Epitaxy is, in essence, crystal growth using gas-phase chemistry, and in the Solexel process the key material is trichlorosilane gas.

By forming a silicon crystal in that way, the technology developed by CTO and founder Mehrdad Moslehi neatly sidesteps the traditional but cumbersome method of making silicon cells from polysilicon feedstock, ingots and wafers. In fact, says the company, it could eliminate any need for that supply chain.

Thin-film but high efficiency
In the LED world, a crystalline wafer (usually sapphire for white LEDs) forms the substrate on which the high-purity layers of light-emitting material are deposited, and that substrate – manufactured using crystal-growth techniques similar to those in the solar cell industry – has tended to make up a significant chunk of the overall cost of devices.

To get around that potential issue, Solexel instead deposits its 35 µm layers of silicon on reusable templates of monocrystalline silicon, which are subsequently separated from the active material to leave a flexible, large-area and yet high-efficiency cell, based on a highly abundant and cheap material. Solexel claims to have produced record-breaking (for thin-film silicon) cells operating at an efficiency of 19% in its pilot fab, part of a technology roadmap pointing to 23.5% cell efficiency and 22% module efficiency down the road.

So what’s the catch? Well, epitaxy – like any high-quality crystal growth method - is slow. Really slow. Exactly how fast the 35 µm layers of crystalline silicon can be deposited without compromising on conversion efficiency or yield will be perhaps the single key factor determining the cost-effectiveness, and therefore success, of the approach.

With the company saying that it will deliver PV modules at a cost of just $0.42 /Watt, the inference is that Solexel has managed to balance the twin needs for speed and quality. That cost compares with the latest price of $0.60 /Watt for conventional silicon cells, down another 10% in just the past quarter.

Can Solexel turn its promising technology into products capable of disrupting the status quo? Certainly, its venture capitalist investors appear convinced that this is not just any old thin-film start-up. They have just plowed $36.5 million into a series C funding round designed to prove out the manufacturing process at volume scale – bringing total investment in the firm so far to a reported $150 million.

Another investor is SunPower – suggesting that the high-end solar module vendor sees the combination of a disruptive manufacturing process with high-efficiency cells as a winning one, and perhaps one that it can incorporate into its own modules at a later stage.

Patented processes
The exact nature of Solexel’s processes, and the ability to couple high-efficiency conversion with ultra-thin layers are not widely known, although there are perhaps a few clues in the various patents awarded to the company so far.

Typically, the Achilles’ heel of thin-film silicon solar cells is that their efficiency is much lower than conventional designs because of the short optical path lengths that are inherent to the technology. But in US patent 8,035,028, awarded last October, Moslehi describes the use of tiny three-dimensional, hexagonal pyramid-shaped unit cells that can be mounted on a mirror to improve light trapping within the structure, and in turn boost the conversion efficiency.

A subsequent step described in the prior art of that patent involves front-side surface texturing of the layers by wet potassium hydroxide etching to form upright surface pyramids – analogous to the way in which LED manufacturers use surface roughening to improve the efficacy of their light emitters. This increases the optical path length encountered by photons from sunlight hitting the films, and thus the overall cell efficiency.

However, according to a report from the cleantech site GreenTech Media, Solexel uses no wet processing steps in its process. The same article suggests that a deposition speed of 2.5 µm per minute is possible.

Separating the thin-film cell structures from the reusable crystalline silicon templates on which they are deposited is another likely key step, and one that is described in US patent 8,193,076 – awarded only last month.

That piece of intellectual property covers a variety of methods, including the use of either CO2 or Nd:YAG infrared lasers to generate a pulsed thermal shock that can be used to separate the structures. Similar methods – known as “laser lift-off” - have been used in LED manufacturing previously.

The need for speed
For now, the priority for Solexel is to build a copy-exact production line in Milpitas, proving out the manufacturability of the epitaxial approach. If all goes well, it then aims to embark on the construction of a gigawatt-scale facility in Malaysia.

Many have had similar plans before – and very few have enjoyed any measure of success, yielding instead to the less elegant but seemingly more effective cost reduction brought about by economies of scale, cheap credit and massive oversupply.

Whether Solexel is able to buck that trend would appear to be largely a question of speed: how fast can it deposit its epitaxial films? How quickly can it ramp to large volumes with a high-yielding process? How long will it take to push conversion efficiencies to the 23.5% level it claims is possible?

And, perhaps most important of all, will it still have a cost advantage over the incumbent technology, if and when all that has been achieved? If it does, then perhaps Solexel really will emerge as the thin-film leader that so many others have claimed to be, but (so far) failed to become.