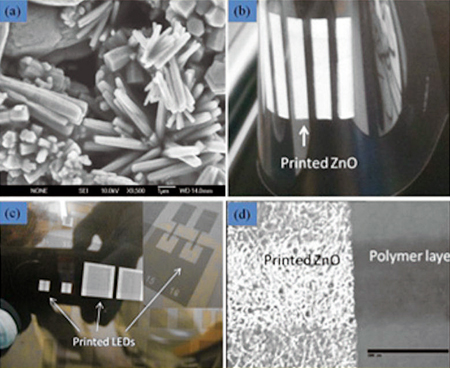 Nanostructures of zinc oxide are suited to the manufacture of white LEDs.

Direct printing of white LEDs onto paper – even as wallpaper to illuminate a room – has been demonstrated by a PhD student at Linköping University, Sweden.

Gul Amin, who recently received his doctorate at the Physical Electronics and Nanotechnology group, on the Norrköping campus, showed in his thesis how it is possible to grow white LEDs, made from zinc oxide and a conducting polymer, directly on a piece of paper. The wallpaper method also has a patent pending.

Nanostructures of zinc oxide have several characteristics that make them suited to the manufacture of white LEDs, among them a large band gap and electrons that move easily and give off relatively large amounts of energy once they have bounced back towards the nucleus. Plus, of course, the fact that the energy is emitted as pure white light.

Amin has now gone further and succeeded in growing white LEDs directly on paper. The active components are nanothreads of zinc oxide on a thin layer of polydiethylflourene, a conducting polymer. To prepare it, the paper is first coated with a thin, water-repellent, protective and levelling layer of cyclotene, a resin.

Professor Magnus Willander, who is leading the research, commented, “This is the first time anyone has been able to construct electronic and photonic inorganic semiconducting components directly on paper using chemical methods.”

In one of the thesis’ other articles, published in Springer’s Journal of Material Science, Amin also shows how it is possible to grow nanothreads on paper, blow them off the surface using ultrasound and collect them in the form of a powder.

This powder can then be used to print the nanothreads of zinc oxide, and thus LEDs, on paper or plastic in a normal printing press. That method also has patents pending, with an application by Amin along with the Ecospark firm, founded by Magnus Willander, and Acreo. 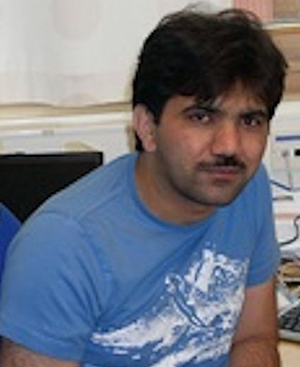 Following his doctorate, Amin has returned to his native Pakistan to pursue his research, but Linköping’s Physical Electronics and Nanotechnology group continues to explore the potential of zinc oxide, in combination with graphene, copper oxide and other materials.

The materials investigated here in Amin’s thesis are CuO and ZnO, which are the oxides of earth-abundant materials. A variety of ZnO and CuO nanostructures were prepared by a relatively simple and low-cost hydrothermal method.

The structural, optical, electrical and sensing properties of the as deposited nanostructures have been investigated in detail. The effect of different hydrothermal conditions, especially the pH of the growth solution, growth temperature, growth time, and the precursor concentration, on the morphology and structural properties of ZnO were studied. The optimization of the growth conditions, realizing the size controllable growth and revealing the growth mechanism, was presented for ZnO nanostructures in paper I-III.

This method works at relatively low temperature and does not require any harsh fabrication process on the target substrates which enable the use of nonconventional substrates such as plastic, polymer, fabric and paper.

Low-cost production is the main advantage for any product to compete in the market and ZnO nanostructures being solution processable provides much potential to become the choice for cheap devices. In addition, devices with ZnO nanorods exhibit better performance due to a better interfacial contact, having fewer defects and improved light extraction.

This is the first systematic report on controlled growth of two different types of metal oxides and fabrication of p-n hetero-junction using ZnO and CuO. This structure is of great importance because it enables fabrication of humidity sensor with improved performance at very low cost, which may be a breakthrough for the development of an efficient humidity sensor. This design has also potential for cheap photovoltaic devices but to achieve all these goals further research is necessary, the researchers say.