Integration of high-energy lasers on naval platforms has lately been one of the major R&D focuses of military-industry partnerships. 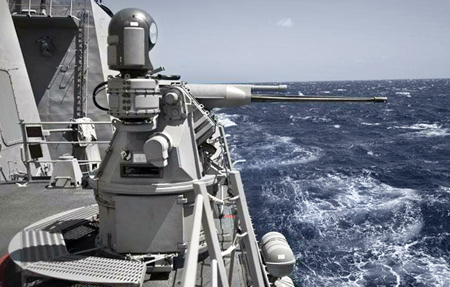 The use of high-energy lasers on naval platforms has been one of the major research and development focuses of the military and industry partnerships focusing on directed energy system development. February’s Directed Energy Systems Conference in Munich heard about the development of an integrated laser and conventional weapon designed for naval use such as counter-piracy and in anti-aircraft applications.

Mike Rinn, Vice President and Program Manager, Directed Energy Systems, at Boeing, told the conference, “The MK38 TLS (Tactical Laser System) that we are developing has the potential to do a number of things. Some day at higher power levels, it will be used in cruise missile defense, countering sensors and eventually for hard-kills on unmanned airborne vehicles (UAVs or “drones”) will be possible as we increase the power. For both naval and merchant shipping, small boat threats are a big problem in many locations, especially when ships approach ports.

“With BAE Systems, what we have been looking at was how to build a directed energy system that would coexist effectively with a kinetic weapons system, such as a conventional machine gun. We think that’s really the path forward rather than having a standalone system. That’s why we approached BAE, because they have developed the 25mm MK38 chain gun and together we began to design a system. So far 182 systems have been delivered to the US Navy, which have been deployed on 12 different ship classes.”

The primary purpose of the MK38 MOD2 machine gun is defense against small boat swarms including Fast Attack Craft (FAC) and Fast Inshore Attack Craft (FIAC). The addition of the tactical laser system provides an integrated kinetic/directed energy capability on a single mount; “war fighter engagement” options to impart a wider range of effects than conventional gun systems; and other capabilities to counter UAVs and other air threats.

The partners are confident that adding the High Energy Laser (HEL) technology will offer unique capabilities in the tactical applications, including – depending on the type of laser – the depth of “magazine”, the potential escalation of force by a single integrated weapon, improved range for target identification and discrimination and so-called ultra precision.

The Fiber Laser part of the integrated system incorporates the following features: a 10kW commercial off the shelf system (the make is confidential), a 37cm beam director and all necessary optical, electro-optical, mechanical, and electrical components required to achieve precision beam control.

The laser system is mounted on the BAE Systems’ MK38 base unit, which includes independent elevation and train drives to inertially stabilize the beam director. The system includes near infrared (NIR) and midwave infrared (MWIR) tracking capabilities. The all important thermal management system provides thermal conditioning to the laser, beam director electronics and enclosure. It is cooled by a propylene glycol/water mix. 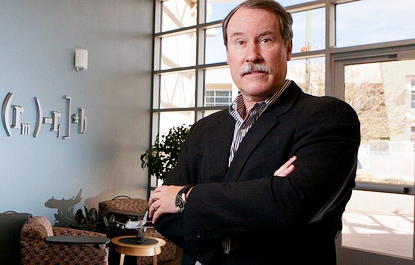 Rinn explained the benefits of a combined system with respect to modern conflict applications, such as piracy and the increasing use of UAVs. “With a kinetic-only system if you have a swarming boats problem and you’re not sure whether it is a hostile threat or, say fishermen, then you’re kind of limited as to what you can do – basically all you can do is shoot it. But if you add the directed energy system to it then it gives you this precise pointing and variable lethality effects such as damaging equipment as a warning.”

“We have a 37cm beam director, which we think is optimum for this particular mission space where are talking about primarily swarming boats, small arms threats. But in the future we could take this design up to higher power levels but the lethality that is provided by single mode bright fiber lasers is actually quite impressive.

”The other unique feature is the repacking of these existing fiber lasers into a package that fits either underneath the gun mount, so that the deck space is not disturbed, so you don’t have to penetrate the deck which is a big advantage for the US Navy, or in the other case, where there is a height problem, this box can be located just off to the side of the gun.”

In recent developments, the thermal source components have been repackaged and redesigned from the unnamed vendor as well as the electronics and electrical side. The beam director design is now complete and the system is expected to be ready for full testing some time during summer 2012. 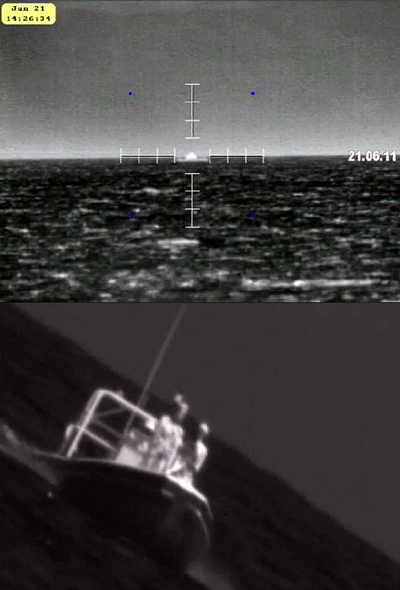 The other important development associated with the MK38 TLS is the improved vision system for identifying the nature of a potential threat – both earlier i.e. further away from the home ship and with greater definition.

Rinn added, “A common threat to large vessels as they approach port is a swarm of small boats coming in quickly, with a low profile, and either in daylight or at night. So having more intelligence as you look at these potential targets and being able to sort through them quickly and accurately is critically important. With the TLS beam director optics, the threat boat type, individuals and weapons can be identified at a significant range which buys the ship time to determine hostile intent.”

”So what we are seeing is that we can increase that identification capability significantly from the current systems that we have and increase the lethality of the system consistently beyond the range of the gun, so what we have done is augmented the system. Obviously if you’re in bad weather – rain, heavy fog etc – then you are going to have to use the conventional radar system and the machine gun, but being able to hand off back and forth between those conditions and clear conditions is what we have been demonstrating.”

In recent testing at Eglin Airforce base, Florida (in June 2011) Boeing achieved what it calls extended range target identification. There are many different effects and considerations - depending on the materials of the target and on the environmental conditions.

Rinn commented, “We were only allowed to score the targets with a low power laser but we ended up accidentally burning two target boats to the waterline - not intentionally - but that did show that if you had an enemy boat approaching you could certainly keep the guys on that boat very busy. With a high power laser at the various engagement ranges we are able to extend effective range – especially in terms of viewing the approaching boat in detail.

“We have achieved significant improvement in target identification ability [see right]. To be able to go through that ID process very fast and to be able to pick up on that target that you may wish to engage is critical. The upper image is a conventional sighting system and the lower image is the what the operator can now see with the 30cm optics, so you can now tell how many people are in a boat, whether they have weapons and perhaps what is their intent.”

Matthew Peach is the a Contributing Editor to optics.org