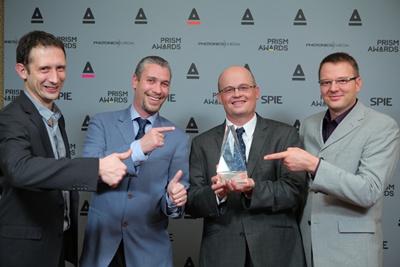 Amplitude Systèmes, the France-based ultrafast laser specialist, is set for significant investment and expansion after it raised close to €30 million in syndicated private equity financing.

The deal, structured by Cathay Capital Private Equity, sees early investors in the form of the CM-CIC bank and the regional venture group Aquitaine Création Investissement make a successful exit from Amplitude.

According to Cathay's release on the Amplitude deal, the laser company currently boasts annual revenues in the region of €25 million, and a double-digit operating profit.

Founded in 2001 by Gilles Riboulet and Eric Mottay, Amplitude now offers a range of ultrafast lasers for both medical and industrial applications. Compared with traditional Ti: sapphire resonators, its lasers are much better suited to the commercial world, largely because they are diode-pumped, and able to offer much greater reliability and a compact design at a far more competitive price.

The advantages of the approach were recognized just last month at the 2011 Prism Awards, hosted at the Photonics West trade show. At the event, Amplitude won in the “industrial lasers” category for its Satsuma HE ultrafast fiber laser, which delivers 350 fs pulses at a repetition rate of more than 1 MHz and with a pulse energy of up to 20 µJ.

Future healthcare
President and CEO Mottay told optics.org that the new finance would support further investment in R&D and international expansion (the company already has a presence in China) for the commercial wing of the company, as well as at its affiliate Amplitude Technologies – where the focus is on high-power Ti:sapphire lasers for the development of future healthcare applications at major research laboratories.

According to Mottay, the emergence of petawatt-class Ti:sapphire lasers means that these ultrafast sources now deliver sufficient energy to support a technology called laser proton therapy. Amplitude Technologies is working with the CNRS and CEA French government laboratories, as well as the Curie Institute and the Gustav Roussy Institute, to advance the approach for both medical imaging and, potentially, cancer therapy.

“Until recently, a limitation was the peak power of ultrafast lasers required to generate protons energetic enough for therapeutic use,” Mottay said. Although many challenges remain to be overcome, the CEO says that the first in vitro tests of the approach are scheduled to begin this year. “We expect validation and demonstration of the technology within the next three to five years, at which point therapeutic deployments (including system design and clinical trials) will take place.”

For now, the commercial focus remains on applications in ophthalmology – where femtosecond lasers are widely used in LASIK surgery, and are starting to become a feature of cataract surgery and corneal transplants – as well as analytical chemistry, the pharmaceuticals industry and in medical device production.

Mottay declined to comment on the potential size of the cataract surgery market for Amplitude, but it is a sector that has attracted serious money over the past couple of years, perhaps most notably through the July 2010 acquisition of LenSx Lasers by Swiss eyecare giant Alcon - a deal that may end up worth close to $750 million, depending on future system sales. Meanwhile the Austrian femtosecond laser specialist High Q Technologies was acquired by Newport Corporation last July.

Franco-China entrepreneurship
Cathay Capital, the private equity company that arranged the new Amplitude financing, is a relative newcomer. Founded only five years ago by young Chinese entrepreneur Mingpo Cai, and with headquarters in Paris and Shanghai, it is currently investing its second fund, which according to the group’s web site is worth at least €125 million.

In a statement announcing the Amplitude deal, Mottay and Riboulet said that the company’s existing presence in both France and China was a key factor in attracting Cathay, while the private equity group’s managing director Edouard Moinet added:

“The quality and dynamism of the managers and their teams…and the significant resources in research and development [at Amplitude] leave us very confident in the company’s ability to pursue ambitious development by consolidating its existing market shares and exploiting new markets, which remain numerous.”