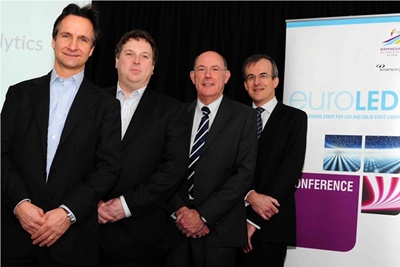 The value of the market for high-brightness LEDs used in general lighting applications will likely peak in 2017 before dropping away as the cost of the technology falls sharply.

That’s according to IMS Research market analyst Jamie Fox, who told delegates at a euroLED “market kicker” conference hosted by the Birmingham Science Park - Aston, UK, that the “best years” for LED vendors selling into the general lighting market would be 2013-2017.

Over that period, market penetration is expected to grow massively from its current unit level of only a couple of per cent, to 10% in 2014 and 25% by 2017. And although the cost of LEDs is likely to fall quickly over the next five years, that won’t be enough to hold back the value of the market for LED chips in general lighting until after 2017, Fox indicated.

But from 2018 onwards, saturation will take over and the falling prices of LEDs, combined with reduced rates of lamp replacement thanks to the long lifetime of the technology, will see the market for LEDs used in general lighting start to shrink.

The impact of that wave of adoption will also be seen in the wider lighting market. The emergence of LEDs will initially spark a period of significant growth, from around $85 billion now to $120 billion by 2017. But as lower costs and saturation kick in, that figure may then shrink back to $105 billion by the end of the decade, Fox thinks.

Multiple pathways to LED cost reduction
One of the key drivers of that cost reduction could be a move to gallium nitride LED chip production on silicon wafers instead of either sapphire or silicon carbide. The novel approach is being pursued by a number of the major players in the industry today – albeit with varying degrees of success.

Speaking at the same event, European marketing director at chip producer Bridgelux Tom van den Bussche said that the switch to a silicon platform would cut costs by 75% - partly through the lower price of silicon, but also through enabling a larger (8-inch) platform that can take advantage of obsolete silicon wafer manufacturing fabs whose owners have now largely moved on to 12-inch silicon.

Van den Bussche added that Bridgelux, fresh from another $20 million injection of venture funding that brings its total capital raised thus far to more than $200 million, could be in production with GaN-on-silicon LEDs by the end of this year.

The company’s latest investment came from China’s Kaistar Lighting, a joint venture between Taiwan-based LED maker Epistar and Shenzhen’s Kaifa Technology. Bridgelux is expected to take advantage of an 8-inch silicon facility in Japan for back-end production of the chips fabricated on the larger wafer format.

According to van den Bussche, Bridgelux has recently shown silicon-based LEDs delivering an efficacy of 160 lm/W at the cool-white color temperature of 4700 K, as well as 125 lm/W at the much warmer 3000 K color – indicating a performance that can rival today’s state-of-the-art devices. One of the key questions now to be answered is whether the company can replicate that performance level in volume and with a high-yielding process.

If that can be done, then a silicon-like manufacturing approach ought to deliver serious cost reduction, because the current method – largely restricted to 4-inch wafers – requires a number of inefficient and time-consuming stages, for example the laser lift-off step that is used to separate the GaN wafer from its sapphire host.

Lattice mismatch
Skeptics of the GaN-on-silicon-based approach point to the inherent lattice mismatch between the two crystals, and the need to produce a complex buffer layer between them to overcome the stresses and strains encountered in the high-temperature MOCVD deposition process, as a key weakness. They suggest that sapphire will remain the material platform of choice once scaling difficulties are overcome and the current overcapacity is absorbed. That overcapacity is currently holding back a planned transition to 6-inch sapphire and SiC LED wafer production at some of the industry’s leading manufacturers.

But other factors are at work, too. Fox says that the vast numbers of MOCVD reactors, used to deposit GaN layers onto the wafers, shipped to Chinese LED makers in recent years are now “mostly” switched on and in production, even if the industry’s overall capacity utilization remains low at the moment.

The analyst says that this shift of the LED manufacturing center of gravity will continue to drive some future cost reduction, even though leading-edge manufacturers do retain a significant performance advantage at this point.

But with some lower-priced LED lamps already being marketed at a price of around $10 in the US and China, the signs are that this may be happening faster than Fox had predicted in some regions. Average prices do remain much higher, however, and are not expected to break through the $10 barrier until 2014, before dropping to $5 in 2017. 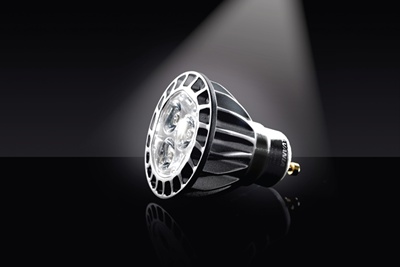 Quality of light and ‘useful lumens’
While cost is perhaps the leading factor in driving adoption, the quality of the light produced by LED lamps is also critical, and at present only the very best chips are really suitable for general lighting applications. Worryingly, a survey carried out last year by the lighting firm Havells-Sylvania found that 85% of consumers who had bought LED lamps were unhappy with the quality of light that they produced, and would not purchase them again.

Speaking at the same euroLED event, James Hooker, R&D manager for LED and special lamps at the company’s Belgian operation, said that those findings “shocked us to the core”, with the entire industry desperate to avoid a repeat of the light quality issues that have plagued compact fluorescent (CFL) lamps.

Predictably, it is not the technology itself that is causing this problem. Hooker said that the market had become flooded with inferior LED light sources, with some replacements for 50 W halogens found to be delivering only the equivalent amount of light as a 25 W bulb.

In fact, says Hooker, precisely zero LED lamps have so far emerged as genuine replacements the 50 W halogen lamp – aside from a recent introduction from his own company (the Sylvania RefLED ES50 GU10), that is. One problem is that standards and regulations have yet to really catch up with the fast-moving industry. “LEDs have to match the lumen flux of the things that are being replaced,” he said, while pointing out that simply measuring the total lumen output of a product is insufficient because it does not consider the optical quality of a lamp design – in other words the “useful lumens” that it emits.

Encouragingly, the European Commission (EC) is now planning to recognize a new “useful lumen” metric officially, something that should help to ensure that LED lamps do meet key quality criteria and stop disappointing consumers. The metric is based on the lumens emitted in a directional cone of space, or beam angle, rather than the total lumens figure that it is customary to publish for lamps sold in the US.

By specifying the lumens emitted within a 90° cone, says Hooker, it is possible to calculate an efficacy figure in “useful lumens per watt” for reflector lamps, which will be employed for judging whether LED-based lamps really are suitable replacements for halogens - and in which applications they should be used. The new Havells-Sylvania lamp delivers 350 lumens in total, of which 300 lumens are contained within the 90° cone, and is said to be the only such replacement to meet IEC size requirements.

But Hooker also warned that close market surveillance would be essential to ensure compliance with future regulations, and to stop rogue lamps from being sold within the EU. “Without adequate controls, inferior products may remain on sale and jeopardize consumer satisfaction and rate of LED growth,” he warned. Finding and testing LED lamps looks like being critical to the success of this major emerging market, and a real growth area for photonics specialists.