Demand for HB-LEDs to grow six-fold in next decade

Worldwide consumption of packaged “High Brightness” LEDs will increase by a factor of six over the coming decade, reaching $70 billion in 2021, says Electronicast. 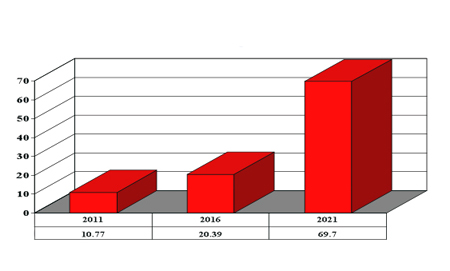 Global consumption of packaged High Brightness (HB) LEDs in 2011 was $10.77 billion, according to a newly released market survey by ElectroniCast Consultants. The firm defines HB LEDs as those with a lumens/Watt rating of 30 to 70 lm/W.

The survey reviews the market in 2011 and forecasts what Electronicast believes will happen between 2012 and 2021. The full 887-page market forecast report, along with an extensive database is available for the fee of US$4,200.

In the year 2021, the worldwide consumption value is forecast to reach $69.7 billion. Market forecast data in this study report refers to consumption for a particular calendar year; therefore, this data is not cumulative data. Market data are segmented into the following geographic regions, plus a global summary: America (North, Central and South); EMEA (Europe, Middle Eastern countries, plus Africa); and APAC (Asia Pacific).

Prices down – sales up

Use of HB-LEDs in mobile and portable devices is forecast to remain a strong segment; however, OLEDs will continue to take market share. The sector is relatively mature and it already has a substantial consumption value in 2012. In terms of consumption value, the use of HB-LEDs in the Automotive/Vehicle category is forecast to multiply by a factor of more than 2-times from 2011 to 2016.

General lighting provides the main illumination of an area. In this study, ElectroniCast provides the consumption data for 2011 as well as its market forecast for 2012-2021 of the packaged HB-LEDs used for general lighting stationary applications, including interior and exterior decorative and functional lighting for residential, commercial and government areas.

LEDs are used in both functional and decorative light fixtures, with an advantage of energy savings. Compared to incandescent lighting, LED-based solid-state lighting delivers visible light with reduced heat. In addition, its solid-state nature provides for greater resistance to shock, vibration, and wear, thereby significantly increasing its lifespan.

The consumption value of HB-LEDs in the signage/professional display application is forecast to increase at an average annual rate of 22.1 percent from 2011 to 2016 and then increase at an impressive 35.9 percent per year (2016-2021). Consumption of HB-LEDs in miscellaneous (non-specified) applications is forecast to reach $710 million in 2016, before decreasing during the second half of the forecast period (2016-2021).

Also, the number of white packaged light emitting diodes require in the back lighting unit in the consumer-level LCD-TV and desktop monitor sector will decline, due to increased luminous efficacy and expected improvements in supporting optics (components and packaging). 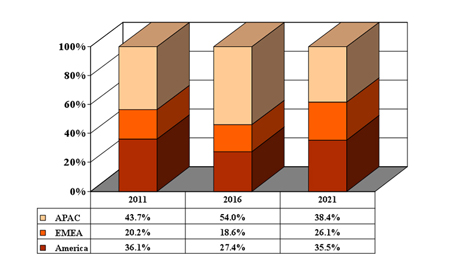 optics.org Does Electronicast foresee a significant switch in both manufacture and consumption of HB LEDs from the West to the East i.e. from the Americas and Europe to SE Asia and the Far East?

Theresa Hosking, VP Marketing, ElectroniCast Consultants Consumption in the American region – including South, Central and North America – is forecast to expand in value from $3.88 billion in 2011 to $24.73 billion in 2021. The Europe, Middle East and African region held a 20.2 percent share of global HB-LED consumption value in 2011; EMEA’s relative market share is forecast to increase by 2021, as the region grows at the fastest pace between 2016-2021.

o.o. Do you expect further legal attempts by Western regulating and governmental agencies to protect the Western-based LED/OLED businesses?

Electronicast We did not forecast future legal attempts by the regulating and governmental agencies; however, we are projecting that one of the major market dynamics and drivers for the use of HB-LEDs will be the continued financial support, including subsidies and incentives, and energy efficiency legislation, regulations and standards by the regulating and governmental agencies, which tend to benefit LED-based illumination.

o.o. Can you comment on the value of your 10-year forecast in such a volatile market and global economy, considering: the likely emergence of LEDs / OLEDs with significantly higher efficiency and more stringent energy and recycling legislation.

Electronicast The length of time of the product planning cycle for an LED-based lighting product from the idea-stage (R&D) through the concept-stage (prototype) to the innovation (new product) can take up to seven years. Therefore five-year forecasts and 10-year forecasts, which quantify the consumption of such products, are vital for developers in the strategic planning process. Developing a product-line without the benefit of independent market projections is not acceptable in terms of best practices.

The future market for a particular type of HB-LED consumed in selected applications depends on a number of factors, including: user equipment demand, energy efficiency requirements and government regulations, future-proofing, the progress of the [wider] economy and investment community, product life cycles, and possible competing technologies.

ElectroniCast analysts forecast the growth rates in HB-LED quantity use in each application, along with price trends, based on competitive, economic and technology forecast trends, and apply these to derive long term forecasts. The concluding usage growth rate forecasts depend heavily on analysis of overall end user trends toward device usage and economic payback.

Matthew Peach is a contributing editor to Optics.org