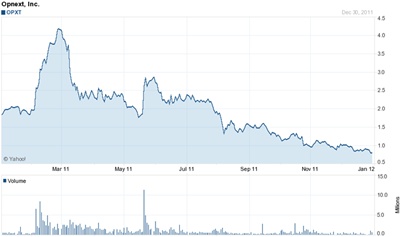 Optical component maker Opnext has said that insurance policies may not be sufficient to fully cover losses arising from the recent flooding of contract manufacturer Fabrinet’s Chokchai campus in Thailand.

The California-based company, originally a spin-off from Japanese electronics giant Hitachi, was one of those hit hardest by the severe flooding – compounding a difficult year in which it has also had to deal with the impact and aftermath of the Japanese earthquake and tsunami in March.

In a statement to the US Securities and Exchange Commission (SEC) on December 28, Opnext said that it had had production equipment – primarily test sets for 10 Gb/s optical modules – with an original cost of $31.1 million located at Chokchai.

“While it has been determined that some of the more sophisticated measurement equipment escaped damage from the flood waters, the company is still in the process of determining the extent of equipment lost,” read the statement.

Admitting that the full extent of the loss of equipment and inventory was not yet known, Opnext also said that $7.6 million in raw materials and $8.1 million of finished goods were at the site prior to the flood. Around half of the finished goods are in good condition, it said, while the remainder was still being assessed.

Diverting production
Shortly before the Opnext statement, Fabrinet had updated investors while simultaneously issuing an S-3 registration statement with the SEC. With its nearby Pinehurst facilities and the surrounding area now dry since late November, it has been relocating manufacturing equipment there, while an assessment of the costs of damages and insurance claims is still ongoing. “At this time, we are unable to estimate the range of losses that we may incur as a result of the flooding,” it said.

Opnext has diverted some 10 Gb/s module production to Pinehurst, where Fabrinet has allocated it some surface-mount technology (SMT) lines, and where new test systems are under construction.

That production is expected to start in February, while Opnext is also relocating some limited production to its own sites in Japan and California, and engaging another contract manufacturer with the aim of dual-sourcing production of some high-volume products.

Opnext said that it would have restored approximately 20% of the lost 10 Gb/s module production capacity by the end of December, although a return to full capacity is not expected until at least April.

As a result, there will be a significant impact on the company’s sales and profitability, although Opnext did not quantify the likely impact on figures for its fiscal year 2012, which runs until the end of March. Those figures will likely depend on the detail in both its and Fabrinet’s insurance policies, which at present remain unclear.

The company’s SEC statement concluded: “While Fabrinet maintains insurance for the equipment and inventory located at the facility (and Opnext maintains independent insurance for a portion of the inventory) and there are additional contractual protections in favor of Opnext that Fabrinet has stated it will honor, it is not clear that the insurance will be adequate to fully cover Opnext’s losses or that Opnext will otherwise be made whole.”

Shares in Opnext dropped by 10% after the company issued its statement, and the company exited a difficult 2011 valued at only half the level with which it had started the year.