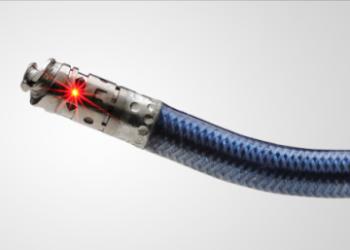 An injection of Series C funding worth $22.5 million has been announced by Avinger, the California-based medical device manufacturer. Avinger develops multi-functional catheters intended specifically for the treatment of peripheral artery disease (PAD), the common condition in which large arteries become blocked and allow only restricted blood flow, particularly in the lower extremities of the body.

The funding will provide capital for further commercialization of Avinger's range of catheter instruments, which can be threaded through a blood vessel to reach the occlusion in an artery affected as part of a surgical procedure to relieve PAD.

A particular focus for the company's product development is the incorporation of optical coherence tomography (OCT) into its therapeutic instruments. The Ocelot catheter is Avinger's first such instrument, offering physicians treating PAD a real-time intravascular navigation guidance system. It is the first product using OCT that is designed and indicated for the peripheral intervention market for patients suffering from PAD.

"Ocelot is not a diagnostic catheter, but instead uses OCT to guide the physician in real-time during the interventional procedure," Deborah Getz of Avinger told optics.org. "Other catheters that use OCT in the coronary space are used to provide initial imaging before then being removed from the vasculature, so that a different catheter can be used to cross the chronic total occlusion in the blood vessel. Ocelot has OCT integrated into the catheter itself, so that the imaging capability is on-board and provides real-time images while the main intervention in occurring."

In addition, Ocelot's imaging capability can be used while advancing the catheter forwards, instead of while pulling it back, as is said to be the case in other related imaging devices. This enables it to provide a true guiding system during the procedure.

Ocelot received CE-mark approval in September 2011, allowing it to be marketed and used in Europe. Avinger indicated that it hopes to gain FDA 510(k) clearance for the product in the US in the future.

• The value of OCT as a precise imaging and measurement tool for surgeons to use during procedures inside blood vessels has been apparent for some time. Last year an artery-imaging tool from St Jude Medical that uses OCT to provide precise measurements of lesion dimensions along with the size and structure of blood vessels was announced.

Meanwhile James Fujimoto, one of the fathers of OCT when the technique was first developed at the Massachusetts Institute of Technology, has said that the emergence of high-speed CCDs has been a key recent development, since it enables precisely the kind of fast three-dimensional OCT imaging that can assist physicians with real-time diagnostic information.