Strengthening demand and a surge of positive feeling from Photonics West convinces vendors that 2011 will be a good year, finds Longbow. 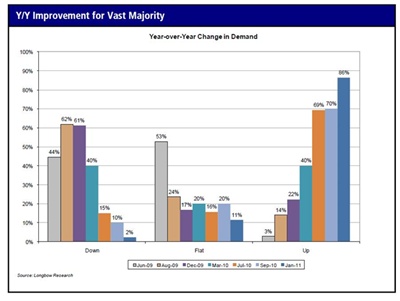 The pent-up optimism detectable from many photonics vendors towards the end of 2010 has burst into the open. According to research from analysts at Longbow Research, a wave of confidence has now spread across the sector.

"Demand was huge in Q4 2010, and is staying strong going into Q1 2011," said Longbow's Mark Douglass. "Eighty-six percent of companies surveyed reported stronger year-on-year demand in Q4, with 11% staying flat, and only 2% reporting a decline." Equally significant, sequential demand was up for 76% of respondents since the previous quarter, with 21% remaining flat, and 2% still going backwards.

The result was some standout optimism for the year ahead, with a full 78% of survey participants expressing a positive outlook, compared to 59% who said the same as recently as October 2010. Twenty-three percent were neutral about the prospects for 2011. None were negative.

The growth has been broadly spread across several different sectors, including automotive, medical and machining applications, as signs point to a renewal in capital expenditure by manufacturing companies. At the same time, consumer spending on certain high-end items has remained robust despite the economic climate, providing what now looks like another positive sign for photonics vendors.

"Perhaps the success of the iPad at a time when consumer spending overall was very weak might be a little surprising," commented Douglass. "But so many photonics companies are involved in the manufacture of flat-panel displays or printed circuit boards that the explosion of interest in devices like the iPad and smart phones has had a ripple effect. Consumers are still more than willing to spend money on gadgets, which has knock-on effects for photonics."

The real recovery
Having assessed the mood at Photonics West, Douglass was in no doubt that a bona fide recovery in manufacturing was now under way: "This isn't illusory or a suspect result. This is real. The manufacturing sector in the US has picked up tremendously, and there is no indication that a 'double-dip' recession is going to occur, or that the upturn won't be self-sustaining. Companies are beginning to invest again in equipment that will provide them with increased productivity and higher quality. Many of them came out of the downturn with a lot of cash, and now they are continuing to invest it as they slowly start to hire people again."

As Douglass confirms, the relief at Photonics West was palpable. "Almost everyone in the sector saw signs of a positive bounce in 2010, and we can now see that 2011 is going to show continued growth, so Photonics West was a very positive show for the industry," he noted. The optimism on display in San Francisco leads Longbow to predict that the overall global market for lasers will expand by 11% in 2011, with double-digit growth expected in most sectors.

Revenues from industrial lasers should certainly be in good health, with fiber lasers continuing to outgrow other laser types and find new application areas. Douglass expects IPG Photonics, currently engaged in a litigation dispute with IMRA America, to capture the majority of high-power fiber laser sales because of its first mover position and apparent price advantage, but other vendors are likely to capture some ground during the year. Alternative products from Coherent, Rofin-Sinar and JDSU are either expected to appear or are available already.

"Fiber lasers will probably make substantial gains against CO2 lasers in high-power laser metal cutting, and continue to gain share against solid-state lasers in low-power applications, even though most of the low-hanging fruit has been picked here," commented Douglass. "But despite the inroads fiber lasers are making with end users and OEMs, high-power CO2 lasers should also see double-digit growth in 2011." 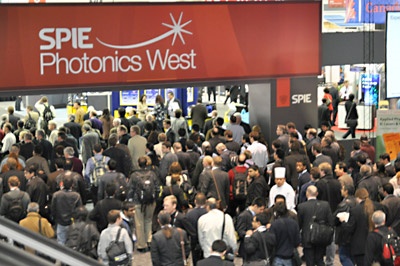 German growth
Preliminary figures released during January showed signs of equivalent health on the opposite sides of the Atlantic. The Eurozone PMI (Purchasing Managers Index, a broad measure of economic health) continued its upward movement to 57.3. Although not hitting the same level as the US PMI for the month, which reached 60.8, the Eurozone number indicates that the region's industrial production is now growing at a healthy rate.

As part of its fourth-quarter analysis, Longbow surveyed the current status of laser demand in Germany, the continent's largest photonics market. "Overall demand in Germany seems to have increased, but perhaps slightly less than in the US or Asia, driven by pent-up demand, increased investments and strong exports to Asian markets," commented Douglass.

"Generally speaking, Germany has not seen much of a shift from CO2 lasers to fiber lasers. Choice of laser is heavily dependent on the nature of the end application, and we found some evidence of an increased demand for solid-state disk lasers, a substitute technology for fiber lasers."