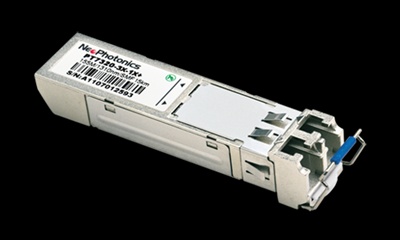 The San Jose company priced its IPO at $11 per share and raised gross proceeds of $82.5 million on February 2, not including a potential over-allotment allocation.

Just three trading days later, and NeoPhotonics – listed under the ticker symbol NPTN – was already trading at a significant premium to that listing price, reaching $18 in early activity on February 7.

Although its corporate headquarters are in Silicon Valley, NeoPhotonics’ center of gravity is actually in China. Of its near-3000 employees, all but 167 are located in Shenzhen, where the company manufactures and sells components such as transceivers, arrayed waveguide multiplexers and mixers.

However, Neophotonics also maintains a silica-on-silicon wafer facility in San Jose, where it carries out key research and development activity.

Multiple acquisitions
NeoPhotonics has a slightly unusual history for a photonic component manufacturer, in that it has its origins in the development of nanomaterials for completely different applications such as batteries. But both before and after a period of Chapter 11 bankruptcy, from which it emerged in March 2004, the company embarked on a series of acquisitions of photonics firms under CEO Timothy Jenks, who has led the company throughout that time.

Those acquisitions included the PIC developer Lightwave Microsystems in March 2003, followed by Photon Technology three years later, as well as MEMS specialist Lightconnect, InP device maker Beamexpress, tunables company OpTun, and Paxera – all within the space of a few months during 2006.

The result has been rapid revenue growth at a compound annual rate of 45% and, last year, profitability. In 2009, Neophotonics made a $6.8 million loss on revenues of $155.1 million, but in 2010 the company booked a profit of $2.9 million on sales of $132.9 million in the first three quarters of the year. 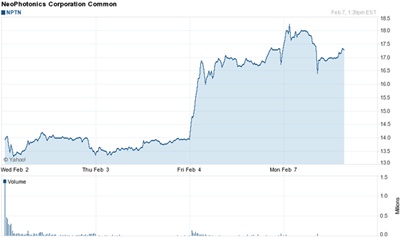 The devices that NeoPhotonics makes are in increasing demand as communications networks are upgraded to handle the rapid growth rate of data-centric services in particular. The market analyst Infonetics measured the 2010 market for optical network hardware at $12.9 billion, and it expects this to grow to $15 billion by 2014.

Infonetics predicts that, by 2014, ports for 40 Gb/s and 100 Gb/s transmission are likely to be worth $3.4 billion; reconfigurable optical add/drop multiplexers (ROADMs) $4.9 billion; and passive optical network equipment for fiber-to-the-building applications some $3.8 billion.

NeoPhotonics also has a substantial shareholding (18.7%) in the Norwegian company Ignis, which makes a variety of optical components for the communications market, and was at one time a subsidiary of Bookham Technology (now Oclaro).