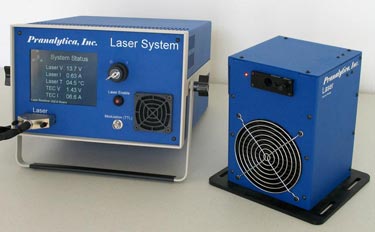 US-based Pranalytica has unveiled a 2 W, fully packaged, continuous-wave, room-temperature quantum cascade laser (QCL) emitting at a wavelength of 4.0 µm. According to the company, the product (model 1101-40) is a significant breakthrough in the development of directional infrared countermeasures (DIRCM) systems for commercial and military aircraft.

Pranalytica's product portfolio also includes a 2 W QCL operating at 4.6 µm (model 1101-46). With the availability of a shorter wavelength mid-infrared QCL system, Pranalytica believes that it is the only commercial supplier that can provide semiconductor laser-based sources for the 3.8–4.8 µm band needed to protect aircraft from shoulder-fired missiles or MANPADS (man portable air defence systems)

"This rapid technological advancement represents a significant leap forward in meeting the needs of our aerospace, defence and homeland security customers," said Kumar Patel, president and CEO of Pranalytica. "It puts Pranalytica in the unique position as the only supplier of mid-wave infrared (MWIR) semiconductor laser-based solutions for affordable countermeasures against MANPADS. Our customers now have a complete MWIR solution that provides primary, electrically pumped semiconductor lasers operating at room temperature without the need of cryogenic or even water cooling, covering the 3.8–4.8 µm spectral band."

For several years, the US Department of Defense has supported a major effort to develop a new generation of laser-based DIRCM systems to dramatically improve the level of protection available to aircraft against heat-seeking missiles.

The Homeland Security Counter-MANPADS programme is looking at adapting DIRCM technology systems used on select military aircraft for commercial use, which are expected to provide unprecedented improvement in protection against MANPADS.

Pranalytica has already shipped a number of its 2  4.6 µm QCL systems to tier-one aerospace and defence contractors. However, until the release of the 4.0 µm device, application engineers were forced to use laser sources other than primary semiconductor lasers for covering the critical region of the spectrum between 3.8 and 4.2 µm for infrared countermeasures.

The new 2 W, 4.0 µm version of the room-temperature operation QCL system is said to maintain the same output beam quality as earlier Pranalytica systems. The laser package is hermetically sealed for reliable operation in adverse environments and the laser output is collimated using an internal lens system. In addition to DIRCM, both model 1101-40 and 1101-46 could be used in applications such as LIDAR and free-space optical communications.