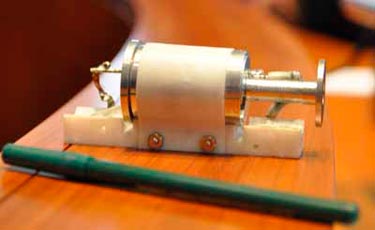 Laser technology was celebrated with a rare firing of the first working laser at a conference in Vancouver, Canada, last weekend honouring its inventor, Theodore Maiman, along with other observances of the technology's golden anniversary.

At Simon Fraser University (SFU) in Vancouver, Dan Gelbart, a University of British Columbia professor and inventor, had the honour of activating the ruby laser that Maiman built 50 years ago at Hughes Research Labs in Malibu, California. The invention was the first demonstration of an idea about the absorption and emission of radiation that Albert Einstein characterized as a "splendid light" when he envisioned it in 1916. 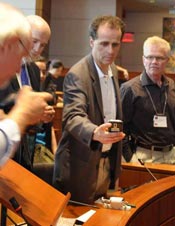 An international panel of speakers, including SPIE's CEO Eugene Arthurs, paid tribute to Maiman's vision and perseverance. Maiman's wife, Kathleen, helped to organize the conference at SFU, where he taught before his death in 2007.

Speakers noted that the first laser was greeted with mixed understanding, with references such as "death ray" appearing in popular press reports and its characterization as "a solution in search of a problem". But an avalanche of applications in healthcare, security, entertainment and numerous other areas followed. Edward Moses of the National Ignition Facility (NIF) at Lawrence Livermore (California) National Laboratory noted that, just three days after the announcement of Maiman's laser, John Nuckolls proposed using the laser to create fusion. The powerful laser array at NIF is now working on creating a clean energy source using fusion.

A weekend ceremony for staff and their families at the Hughes California facility, now HRL Labs, marked the designation of the location as a Physics Historic Site by the American Physical Society. There, on 16 May 1960, Maiman and his colleagues Irnee D'Haenens and Charles Asawa first powered up the device, comprised of a rod of synthetic ruby crystal with reflectors at each end surrounded by a three-loop flash lamp. A commemorative plaque installed at the facility called Maiman's laser "the harbinger of a technological revolution that has forever changed the world."

A LaserFest symposium in San Jose, California, convened laser pioneers and other experts for the "Retrospectives on the invention of the laser" session on Sunday at CLEO/QELS. LaserFest is a collaborative celebration among supported by more than 60 partner and sponsor organizations. Founding partners are SPIE, the IEEE Photonics Society, the American Physical Society and the Optical Society. SPIE is also celebrating laser technology through its Advancing the Laser: 50 Years and Into the Future tribute. 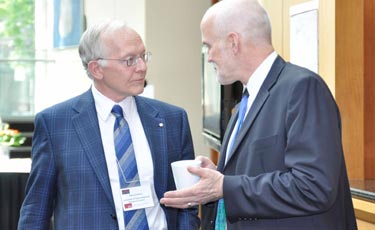 Speakers included Charles Townes, who shared the Nobel Prize for Physics in 1964 with Nikolay Basov and Aleksandr Prokhorov for work on the maser, which preceded development of the laser. Townes described the rapid evolution of the technology and multiple related "accidental" discoveries. "Maiman made the first one, we made the first continuously operating laser, and then one after another new devices were demonstrated," Townes said. "I am amazed and impressed how people can add ideas and bring new ideas from other fields."

A large historical laser display originally organized by SPIE for Photonics West last January will be shown in conjunction with the LaserFest symposium in San Jose this week. It will be shown again at SPIE Optics + Photonics in San Diego, California, during the first week of August, and can be seen online in a virtual laser museum.