When the NextGenPCF project started back in 2006 its aim was to develop and incubate products for biomedical, telecommunication and sensing applications. After a spell of three and a half years, the project has brought together 19 partners, made key scientific breakthroughs and secured Europe's place as a leading developer of photonic crystal fibre (PCF).

"Our intention was to create a circle of market growth across Europe," deputy project co-ordinator Jonathan Knight from the Centre for Photonics and Photonic Materials at the University of Bath, UK, told optics.org. "We wanted to develop the entire technology chain – everything from raw materials right through to devices. Each link in the chain had to work to create value and strength."

The Next Generation Photonic Crystal Fibres (NextGenPCF) project received €6.6 million as part of the Information Society Technologies programme of the European Commission's 6th Framework. Work began in June 2006 and the project had its final review meeting last month.

"Our intention was to address some of the needs of the European community where the properties of PCF could bring real value," said project co-ordinator Pierre Sansonetti from Draka Comteq in France.

Biomedical: A supercontinuum source for cytometry and a Raman laser for PDT The project partners are particularly proud of the work that has been done in the biomedical field. One aspect of this is a broadband supercontinuum source for flow cytometry, allowing the multi-parametric analysis of blood cells. This source was demonstrated at the final review meeting, which was hosted by project partner Horiba Medical.

The goal was to develop a supercontinuum that emitted over a wide enough spectral range and was both sufficiently powerful and stable for cytometry experiments. "The combination of high power, stability and wide spectrum was a massive challenge," said Sansonetti.

The end result was a state-of-the-art supercontinuum source emitting down to 360 nm with a spectral power density greater than 100 microwatts/nm in the visible at a repetition rate of 530 kHz.

"At the final meeting we saw an off-the-shelf Horiba product where multiple independent light sources were replaced by this single pulsed supercontinuum laser," explained Knight. 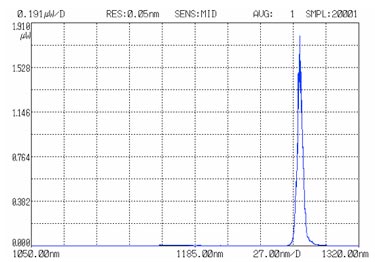 Turning to the second biomedical area, the project has developed a fibre Raman laser for photodynamic therapy (PDT) which uses Bragg gratings directly UV-written into the PCF. "The laser emits up to 7 W CW at 1270 nm," said Sansonetti. "This specific wavelength generates singlet oxygen, which targets and ultimately kills cancer cells. The first in vitro demonstration on breast cancer cells was very promising and we are now moving to set-up clinical trials."

Hollow-core fibre for short wavelengths One promising spin-off was a hollow-core PCF capable of delivering pulses at wavelengths, powers and pulse lengths not possible with conventional singlemode fibre.

"We can deliver 100 nJ pulses of around 100 fs at 540 nm through several meters of fibre," said Knight. "This would be inconceivable with conventional fibre. It is ideal for industrial applications such as laser welding that need light to be delivered to a specific point. Delivery via a fibre is easier than a chain of optics on an articulated arm."

Telecommunications: fibre for home networks and Raman amplifiers Here, the project partners fabricated and evaluated PCF as a candidate for home networks. "We have developed specific fibres and a specific cable to carry the PCF," said Knight. "Our PCF had losses of below 0.1 dB per turn for a 5 mm bend radius. The cable we developed was also very promising."

However, as standard all-solid optical fibres improved in parallel to this work, it looks as though the PCF will not offer significantly better characteristics for this application. "Even though the PCF does not look like it will easily beat other standard technologies, it is an important result to reach," said Knight.

The team reached a similar conclusion for PCF-based Raman amplifiers for long haul transmission. "We still have to work on fibre loss to be competitive," explained Sansonetti. "Even though we produced a state-of-the-art fibre, we would have to improve it to have a commercial product."

Sensing: a methane sensor for mining applications The aim in this thread was to develop a distributed methane sensor based on hollow-core fibres. The idea is that light propagates in the hollow core and the propagation is altered by the presence of methane. 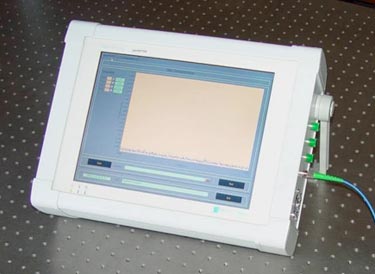 "Lots of demonstrators were produced but we were plagued by multi-path interference – light getting to the end of the fibre by more than one path," said Knight. "In order for the gas to get into the fibre you need holes or breaks but this causes light to couple from one mode to another and fringes to appear in the spectral transmission characteristics. But there was some output that will be commercialised. The electronics for the sensing head will be used in future methane detection systems."

For more information on all aspects of the project, including a full list of the project partners, please visit the NextGenPCF website: http://www.nextgen-pcf.eu/