Turbines see the wind of change 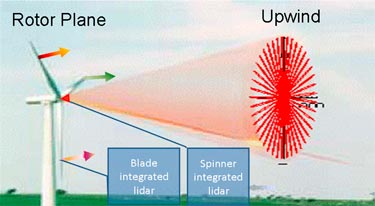 Researchers at Risø DTU in Denmark claim to have carried out the first successful tests on a wind turbine containing a laser-based anemometer built into its spinner. The lidar technology predicts factors such as gusts of wind and turbulence before they hit the blades, allowing the turbine to react intelligently and optimize use of the wind to prevent excessive strain.

"Integrated wind lidars on turbines will provide more accurate measurements of the wind and direction and will give several seconds' warning ahead of incoming gusts and shear," Torben Mikkelsen, a researcher at Risø DTU, told optics.org. "The system reacts by adjusting the position of the blades to protect against damaging gusts and wind shear and use the wind more efficiently."

The first "smart" turbines should be springing up within the next three to five years, thanks to industrial partnerships with Danish firms NKT Photonics and LM Glasfiber as well as the UK's Natural Power, which developed the "ControlZephIR" lidar. The hope is that wind lidars will become standard equipment on all new large (multi-megawatt) wind turbines.

Although wind turbines are already fitted with anemometers, these are currently point sensors fixed behind the rotor plane. The drawback is that they can only measure the wind field disturbed by the turbine rotor. In contrast, the Danish group placed a lidar sensor in front of the rotors, inside the rotating spinner. The result is a more accurate measurement of the inflow to the turbine. 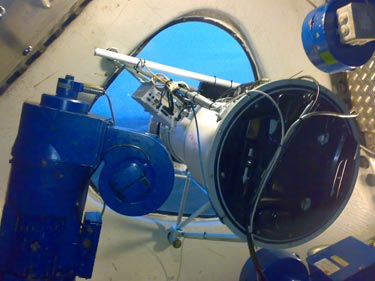 According to Mikkelsen, the lidar system will increase reliability by helping the blades to cope better with the irregularities of wind. As a result, it may be possible to use larger blades. This is especially important for wind turbines installed on cliff tops, complex terrain and in wind turbine parks where blades sizes can reach 120 m or more in diameter.

"Such wind turbines experience wind gusts and negative wind shear that result in increased loading and stress on the turbine blades and structure, shortening their lifetime," he explained. "In extreme cases, wind gusts can bend the blades so that they hit the central tower. The wind lidar measures what is coming ahead of time and gives the turbine a chance to adjust its yaw, blade pitch and rotation rate to mitigate these effects."

In less extreme cases, the lidar data can be used to improve power and provide a more even power output. The technology could also be useful to detect turbulence left in the wake of an aircraft on airport runways.

In the set-up, an integrated laser emits a coherent beam of infrared light into the atmosphere. Tiny airborne aerosols and other contaminants act as small mirrors, reflecting back a small amount of Doppler-shifted radiation into the lidar telescope. The detected Doppler shift is proportional to the wind speed along the beam direction in the lidar's focal volume, and the distance to the measurement volume can be set by the lidar's adjustable focus.