Green lasers: variations on a theme

Well over a dozen papers at this year's Photonics West meeting in San Francisco boasted improvements in harmonic generation to produce visible laser beams, most of them in the green spectral range

One of the most intensely pursued applications for tiny green lasers is "pico" projectors. These not-quite-existent devices would be integrated into cell phones and other miniature gadgets, and allow images to be projected onto any nearby surface – a wall, a sheet of paper, or maybe the back of a co-operative colleague's shirt. Other applications driving the intense interest in green lasers include large-area displays, from movie theatres to planetariums, as well as a raft of possible industrial, medical and scientific uses.

For pico projectors, suitable diode lasers in the red and blue spectral ranges already exist. But green diode lasers were first demonstrated in the lab only last year, and they are not expected to offer the power, efficiency or ruggedness required for commercial application for many years, if ever. For the moment, the R&D effort is focused on frequency-doubled diode lasers.

One of the smallest green lasers discussed at the Photonics West conference was described by John Khaydarov of Spectralus Corporation (Santa Clara, CA) and has a volume of just 0.4 cm3. It's a microchip laser, meaning that the diode-pumped Nd:YVO4 laser crystal and the nonlinear crystal are monolithically assembled into a single, tiny microchip. 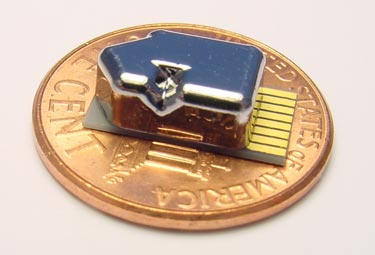 There is nothing new about microchip green lasers. They are found, among other places, in today's ubiquitous green laser pointers. One mirror of these lasers is the face of the laser crystal, and the output mirror is the face of the nonlinear crystal, so the doubling crystal is inside the resonator, taking advantage of the higher fundamental power there. "There is a green mirror on the back of the YVO4," Khaydarov explained, so the harmonic power generated in the backward direction is combined with that generated in the forward direction.

What is unique about the Spectralus laser is the use of periodically poled, MgO-doped lithium niobate as the doubling crystal, instead of the KTP that is commonly used in microchip green lasers. Using this nonlinear material avoids the pitfalls of inherently low conversion efficiency and crystal "greying" with KTP. The MgO doping reduces lithium niobate's natural vulnerability to optically induced refractive-index inhomogeneities, and the periodic poling allows for so-called "quasi" phase-matching.

In one sense, quasi phase-matching isn't really phase-matching at all. Rather, the fundamental and second-harmonic waves are allowed to drift out of phase owing to normal dispersion as they propagate through the crystal. But the crystal's nonlinear susceptibility is periodically reversed so the two waves are repetitively bumped back into phase as quickly as they drift out. The big advantage of quasi phase-matching over conventional (birefringent) phase-matching is its lack of dependence on crystal birefringence. Thus, more efficient materials or more efficient nonlinear coefficients in materials like lithium niobate can be utilized, resulting in much higher conversion efficiencies.

The Spectralus laser generates up to 150 mW of green output with an M2 value less than 1.4. The laser's wall-plug efficiency is 13%, which Khaydarov and his colleagues believe is the highest ever reported for a green laser in that power range.

Two other papers, from authors at the Ferdinand Braun Institute in Berlin, Germany, at the Danish Technical University (DTU) in Roskilde, and at the Fraunhofer Institute for Laser Technology (ILT) in Aachen, Germany, reported the use of periodically poled MgO-doped lithium niobate as well, but in less compact designs.

Both these lasers were tapered diodes, comprising two distinct sections: a distributed-Bragg-reflector ridge-waveguide oscillator, and a tapered semiconductor amplifier. These two sections were assembled in a monolithic microchip. But unlike the Spectralus microchip laser described above, the lithium-niobate doubling crystal was separate from the infrared laser source, and the second harmonic was generated in a single pass through the quasi-phase-matched crystal.

The tapered-diode lasers described in these two papers were designed and built at the Ferdinand Braun Institute. Ole Bjarlin Jensen of the Danish Technical University explained: "We at DTU were to demonstrate the principles and Fraunhofer was to develop a prototype of the laser based on the demonstrations at DTU." <

The Danish researchers illuminated a lithium-niobate crystal with 9 W of single-frequency infrared light from the tapered diode and obtained slightly over 1.5 W of green power in a beam whose M2 they measured to be 1.3. By modulating the current to the diode, they demonstrated modulation frequencies in the green up to 100 MHz. The overall wallplug efficiency of the green laser was approximately 5%, Jensen said. 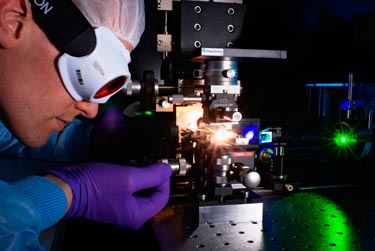 The Fraunhofer scientists designed their prototype with special attention to thermal stability and robustness. They operated the tapered diode at a reduced, 3.8 W output, mounted the focusing and collimating lenses on a Macor plate, and discovered that green-power stability depended significantly on the temperature and quality of the lithium-niobate crystals.

A change in crystal temperature of only 0.05 °C reduced the green output by 20%, so they had to control the crystal temperature to 0.01 °C. But inhomogeneities of the periodicity in poorer-quality crystals made stable operation impossible. With the best crystals, they obtained over 500 mW of green output in a beam with M2 =  1.3, and power deviations less than 0.5% of the average power.

An entirely different approach to the same goal – an efficient, compact green laser for display applications – was described at the conference by Michael Strotkamp of the Fraunhofer ILT. Unlike almost all other solid-state green lasers, Strotkamp's does not employ nonlinear optics. He and his colleagues pumped a 5 mm-long Pr:YLF crystal with the blue output of a GaN diode laser. Pr:YLF has a number of emission lines in the visible, one of which is conveniently in the green at 523 nm.

Strotkamp reported up to 290 mW of green power from a 1 W blue diode whose profile was poorly matched spatially to the 10 mm-long Pr:YLF resonator. A better match was possible with a 500 mW pump diode, in which case the Pr:YLF laser generated 140 mW of green. In both cases, the quality of the green beam was near diffraction-limited, with a measured M2 of less than 1.05.

To demonstrate the suitability of their laser in a digital projector, the Fraunhofer engineers built a prototype only 23 mm long, assembled by successively bonding the components – the pump diode, focusing micro-optics, Pr:YLF crystal and the output mirror – with low-shrinkage adhesive. The resulting package generated 92 mW of green light from approximately 470 mW of blue pump power, and the green beam had an M2 less than 1.05.