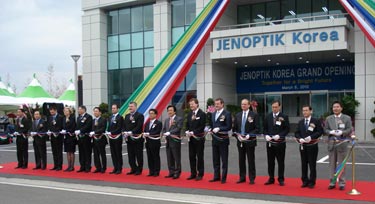 Jenoptik has opened the doors to a new laser application centre based in the the southern Korean city of Pyeongtaek. The company has invested $4.4 million (€3.4 million) in the centre, which houses laser processing systems ideal for customers looking to do everything from initial testing through to pilot and small production runs.

"This moves our process of internationalization a major step forward," said Jenoptik's chairman Michael Mertin at the opening. "Direct market access and a trained service team are indispensable for complex systems. With the new centre, we have laid the foundation for further business activities across all divisions of the Jenoptik Group."

The 500 square metre centre is home to an 80 square metre cleanroom and two laser systems that are said to be ideal for applications such as electronics, photovoltaics and flat-panel displays. Customers and interested parties from across Asia can now test lasers and laser applications onsite using their own materials and refine the processes together with Jenoptik engineers. There are plans to add further laser systems in the coming months.

The centre is based on a campus shared with Telstar-Hommel. Jenoptik and Telstar-Hommel founded Jenoptik Korea in July 2009 and the joint venture has already secured new orders worth around €5 million.

In 2009, the Jenoptik Group reported sales in Asia of approximately €470 million equivalent to just under 8% of overall sales. "We see more great potential for the overall Group in Asia," said Mertin. "With our direct local presence, we can now approach the market better and more intensively."

The Jenoptik Group currently has about 150 employees in Asia in own or joint venture companies and, in addition to Korea, is also present in China and Japan. Current customers include automobile manufacturers and suppliers such as KIA, Hyundai and GM Daewoo.

About the new laser application centre