Nanofibres in a spin

Researchers in Italy have succeeded in rotating polymer nanofibres using just light. The new nano-rotors might be used to make all-optical mechanical nanomachines based on photonic circuits, as well as help to develop next-generation photonic force microscopes. 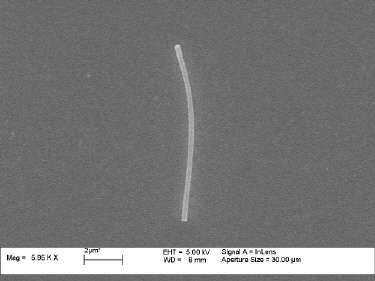 Although the force exerted by light is far too weak to be felt in everyday life, it can be greatly increased by concentrating photons in nanophotonic circuits. Scientists routinely use this force to move micron-sized objects in a technique called "optical tweezers", which work by trapping the objects near the focus of a laser beam. The technique allows objects, such as single atoms, biological cells and semiconductor components, to be picked up and moved around using light alone.

While previous methods to rotate elongated objects, such as nanowires or nanotubes, required a rotating polarized beam of light, the new technique does not need to manipulate the beam's polarization or its intensity. The method, devised by Antonio Neves of the National Nanotechnology Laboratory at the University of Salento, and colleagues, works using a set-up that resembles an inverted optical microscope.

The researchers begin by trapping a polymeric nanofibre at one end using low laser power and then move it to a point slightly higher than its height. The nanofibre aligns itself along the light beam axis and a circular cross-section image can be observed on a CCD camera, which is part of the apparatus.

"Our work demonstrates that we can manipulate polymeric nanofibres with respect to position and orientation using just light," he told our sister website nanotechweb.org. "Such fibres are already established on the market for making filters and scaffolds, and in the last few years, scientists have used the fibres as the active elements in integrated photonic nanodevices."

Manipulating the fibres solely using light means that they could now be used to make all-optical mechanical nanomachines comprising nanophotonic circuits. The rotating fibres might also be used to fabricate next-generation photonic force microscopes – optical traps based on the nanofibres that act as scanning probes to measure forces at the femtonewton scale (10–15N).

The team, which includes researchers at the Italian Institute of Technology, the Istituto per i Processi Chimico-Fisici CNR and the University of Messina, will now look at optically manipulating composite nanofibres, made by mixing together metallic or semiconducting nanoparticles with the polymer. Successful optical trapping of these novel materials will depend on both the geometry of the fibres and the embedded nanoparticles, says Neves.

The work was reported in Optics Express.