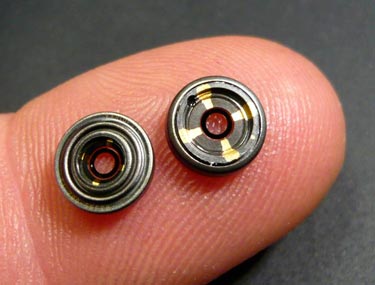 Camera phones could be freed from the curse of handshake blur, thanks to a new liquid lens developed by Varioptic (Lyon, France) and shown at the Mobile World Congress in Barcelona last week. The A316S liquid-lens actuator provides optical image stabilization (OIS) by selectively tilting the lens within the camera module in real time, counteracting the wobble and refocusing the light.

Varioptic liquid lenses use a watertight cell that contains two nonmiscible liquids. The shape of the liquid interface is controlled by a voltage, which in turn changes the power of the lens. The breakthrough in the A316S is to apply that distorting voltage selectively in different locations.

"The new lens uses a multi-electrode design to apply voltage to particular areas of the lens," Varioptic CEO Christian Dupont told optics.org. "This selective tilting compensates for any handshake, and restores image quality comparable to a compact digital still camera."

To determine the extent of vibration in the first place, the camera module is fitted with a motion sensor which measures the wobble and translates it into a voltage. A processor then decides where to best apply that voltage to the lens. The system uses less than 50 mW of power during a shot and can compensate for a camera shake of ±0.6°, according to Varioptic.

Some forms of OIS can already be found in digital still cameras using different adaptive techniques. However, the limited space and low battery capacity available in a camera-phone have always ruled out effective solutions in such devices. Previous approaches have also tended to create unacceptable levels of image noise with respect to the phone's video-capture mode.

"The key technical challenge in the A316S was to develop a transfer matrix able to control three optical variables (focus, tilt X and tilt Y) from four voltages, applied through the lens' four electrodes," said Dupont. "The lens also had to be robust enough to pass all standard mobile-phone drop-test requirements, and retain the same mechanical interface as our previous series of Arctic lenses, enabling them to be fitted into typical autofocus camera modules."

Eliminating the shakes could have a dramatic effect on some sectors of the camera-phone market, as consumers realize the improvements to picture quality that are possible. The technology may also find application in additional markets, such as consumer camcorders.

"The new lens is targeted at the high-end camera-phone and smart-phone market, which in 2009 represented 10–15% of the total worldwide mobile-phone market," commented Dupont. "We believe that OIS will become a major requirement by 2012–2013, and our goal is to win 20–30% of the high-end camera-phone market at that time. The new lens will be a little more expensive than a conventional liquid lens, due to an additional metallization step in the fabrication process, but it will bring huge advantages to the user."