Fourier domain detection has greatly improved the speed and resolution of optical coherence tomography (OCT), opening up the possibility of in vivo clinical imaging. A team of Toronto-based researchers has now shown how this technology could be applied inside the gastrointestinal tract, a technique that could replace invasive biopsies when looking for early signs of cancer (Phys. Med. Biol. 55 615).

The miniaturized OCT imager is the result of collaboration between the University of Toronto (Toronto, CA), Princess Margaret Hospital (Toronto, CA) and Michelson Diagnostics in the UK. The core technology is a multi-beam Fourier domain OCT system that uses a swept source laser (central wavelength 1300 nm; spectral bandwidth ~100 µm) to generate the light output. This main beam is subdivided into four "beamlets" that are directed towards the distal end of an imaging probe that's scanned across tissue samples. Interference between returning signal and the outgoing reference beamlets are used to build a picture of the tissue's structure. 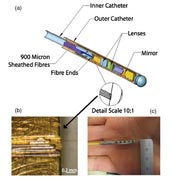 The multi-beam design of the imaging probe really distinguishes this set-up from other OCT systems, according to lead author Beau Standish. Light is delivered to the probe via four optical fibres that have high numerical aperture lenses at their distal end, and are each focussed on a different depth of tissue. Signal from the four channels is then "stitched" together to produce a tiled image.

Designing the probe to work inside of the human body threw up a number of additional design challenges, Standish said. The probe's components have been micro-machined so that they will fit within a casing that is just 5.6 mm in diameter. The device will also have to bend while it is being inserted, so ideally none of the components or the protective casing should be rigid. Glues used to plug the catheter tip must also be safe and suitable for use in a moist, mildly acidic environment.

The system's practicality and the quality of OCT images produced were tested in a preclinical rabbit study. Images of the colon were generated in vivo, while the oesophagus and trachea were resected and imaged ex vivo, owing to problems accessing these small structures in the live animals.

In all three cases, multi-beam OCT images correlated well with histological analysis of the same structures. However, researchers observed a tendency for the signal-to-noise ratio (SNR) within individual channels to vary, leading to some discontinuities on the stitched images.

"What came out of this discovery process were ways that we could improve the system," Standish told medicalphysicsweb. Several options for improving the SNR are now being considered. The trial also convinced the team that the multi-beam probe should be made even smaller. A next-generation probe is now being developed with a diameter of approximately 2.5 mm, a size that should be suitable for clinical endoscopy applications (see: Michelson wins grant to develop miniature OCT probe). The miniaturized probe may also be appropriate for imaging the airways.

In vivo multi-beam OCT imaging could lead to researchers' Holy Grail: clinical optical biopsy, Standish added. Early-stage oesophageal cancers, oral cancers, colorectal cancers and pre-cancerous pathology could then be detected without excising any tissue. This would be less risky for patients and more efficient too.

"Maybe in a couple of years we will be able to take images in the gastrointestinal suite and tell the patient right away whether they have a disease or cancer, and if they do, what grade it is. This way the patient can receive appropriate treatment in a timely manner," Standish said.

The OCT system could also be used in future to give real-time feedback on treatment delivered endoscopically, according to the study's authors.