Thin-disk lasers on the march

Since their invention in the early 1990s by Adolf Giesen, then at the University of Stuttgart, Germany, thin-disk lasers have moved firmly into the mainstream of industrial materials processing. The tiny longitudinal dimension of the disks – they are typically a scant 100 µm or so thick – ensures that the deleterious effects of thermal focusing and thermal birefringence virtually vanish.

Now, as described in a pair of papers at the Photonics West conference in San Francisco this week, Trumpf has further engineered the performance of these lasers to achieve higher power at both the fundamental infrared wavelength, and in the green.

According to Trumpf project leader Christian Stolzenburg, the 700 W output power of the green laser "significantly exceeds all previously published results". He explains that the laser "can have up to four fibre exits, and do either time-sharing or power-sharing" among four different workstations. Applications of the laser include cutting, drilling and annealing.

The Q-switched Yb:YAG laser is frequency-doubled with an intracavity LBO crystal, and operates at a repetition rate up to 1000 kHz with a pulse duration adjustable between 200 and 750 ns. The optical efficiency – the ratio of 515 nm laser output to diode pump power – is unusually high at 35%. The beam-parameter product of 4 mm × mrad (M2 < 25) allows the green beam to be coupled into a 100 µm core fibre.

The green laser is based on the design of an existing Trumpf product, a cavity-dumped infrared laser. In this laser, the resonator of which is shown in figure 1, circulating power builds up in the resonator until the Pockels cell switches its polarization and the power exits the resonator through the polarizer.

One advantage of this design, Stolzenburg says, is its "flexibility to realize various pulse durations over a wide range of repetition frequencies." By adjusting the strength of output coupling provided by the Pockels-cell/polarizer combination, he can tune the pulse duration between 20 and 200 ns. With a constant 30 ns pulse duration and 2 kW of optical pump power, the laser generates approximately 1.3 kW of infrared output independent of repetition rate, from CW to 100 kHz. 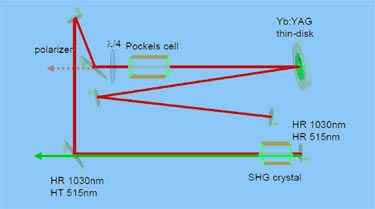 To convert the laser to a visible output, Stolzenburg added an arm for the nonlinear crystal (figure 2). The mirror behind the LBO crystal is a maximum reflector for both green and infrared, so it combines the green power generated in both directions into a single beam. The folding mirror in front of the crystal is a maximum reflector for the infrared and a maximum transmitter for the green. Now it is the LBO crystal that provides the laser's output coupling, whereas in the infrared laser the Pockels cell was the output coupler. 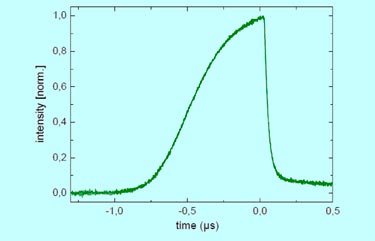 When configured for infrared output (as in figure 1), the laser produces approximately 1.3 kW of output with 2 kW of optical input from the pump diodes. When configured for the second-harmonic output, it generates 700 W from the same 2 kW of input power.

They've got the power

The second Photonics West paper, whose lead author is David Havrilla, describes engineering improvements in basic infrared thin-disk lasers. While previous disk lasers limited their power at roughly 2.5 kW per disk, Trumpf engineers have now boosted that parameter to 4 kW, and expect even higher powers in the future. Calculations show that there is no fundamental limitation up to 30 kW per disk.

There are several successful approaches to boosting the power achievable from a single disk, including increasing the diameter of the beam without increasing the power density. The area of a circle scales as the square of its diameter so, Havrilla explains, "if the pump-spot diameter is doubled, one can increase the pump power [and presumably the output power] by a factor of four." Another approach is to increase the power of the pump diodes, which Havrilla and his colleagues have done by manufacturing their own high-power diodes. 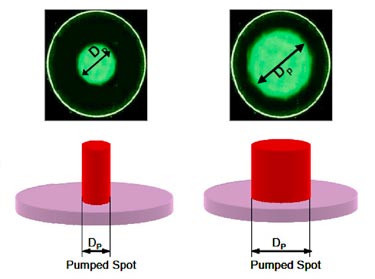 The high-power disk lasers are intended for several applications, including the high-speed cutting of thin sheets ranging up to 2 mm in thickness. In this application, cutting fine detail requires a reduction in cutting speed, which in turn can result in excessive heat at the workpiece.

To avoid this problem, Havrilla has implemented a software program that receives an analogue signal proportional to cutting speed from the workpiece, and switches the laser from continuous mode to a proprietary pulsed mode. In the pulsed mode, the software adjusts the peak power, repetition frequency and pulse duration for optimum results at the indicated cutting speed.

Fine welding of thin foils is another intended application of the high-power disk laser. Power stability of the laser source is crucial, to ensure that welding marks or thermal discoloration are not visible on the back side of the welded parts, while completing the welds at speeds up to 60 m/min. The inherent stability of thin-disk lasers, combined with a Trumpf feedback system, enables a constant power to be delivered despite temperature variations of the cooling water or other environmental changes.

In these and other applications, the thin-disk laser has proven to be an extremely valuable industrial tool, and one that promises to become even more valuable in the future. At Photonics West 2011, delegates can no doubt expect to learn of further improvements in the power, stability and beam quality of these lasers.