Optofluidics set to flow smoothly out of the lab

Nearly 50 years ago, the word "laser" sprang from the laboratory into the everyday vernacular. A quarter of a century later, the phrase "fibre optics" did the same thing. Today, if you ask five experts which photonic technology is most likely to find its way into cocktail-party conversations over the next decade, you may get five different answers but it's certain that "optofluidics" will be close to the top of everybody's list. 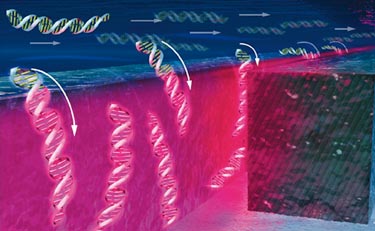 Optofluidics, a discipline that combines innovations in fluid and optical technologies, offers a promising path to so-called labs-on-a-chip, microscopic devices capable of collecting and analysing data, and perhaps even reacting to that analysis. Investigators imagine, for example, tiny labs-on-a-chip circulating in a patient's bloodstream, constantly detecting and destroying cancer cells before they can spread the disease to other parts of the body.

Macroscopic examples of optofluidics include liquid crystals, dye lasers and telescope mirrors based on a layer of liquid mercury in a rotating dish. As the dish rotates, centrifugal force pushes the surface of the mercury into a parabolic shape, ideal for a reflecting telescope. The Large Zenith Telescope at the University of British Columbia, Canada, boasts a mercury mirror 6_m in diameter and weighing 3_tons. A major advantage of optofluidics in this and other applications is low cost – the mercury mirror in the Zenith Telescope was built for 1% of the cost of a conventional 6 m mirror. 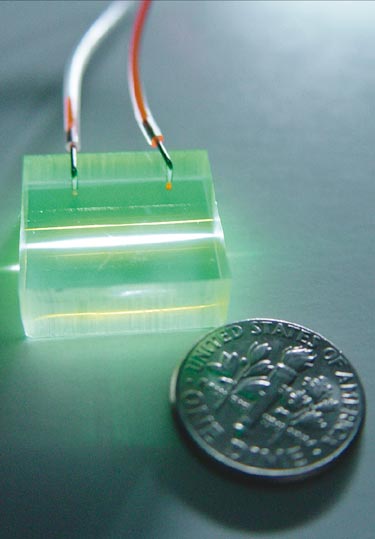 The drawback of optofluidics, compared with conventional optics, is speed. Changes in optical parameters with optofluidics are usually accomplished by moving a fluid from one place to another, an action that takes longer than, say, applying a voltage to an electro-optic crystal.

Go with the flow During the past six or seven years, the word "optofluidics" has taken on a narrower meaning, referring to micro- or nanoscale devices that offer compactness and efficiency not obtainable in larger systems. Nonetheless, the appeal of these minuscule devices is the same as their larger cousins: the broad tunability of optical parameters, low cost, as well as inherent physical durability. 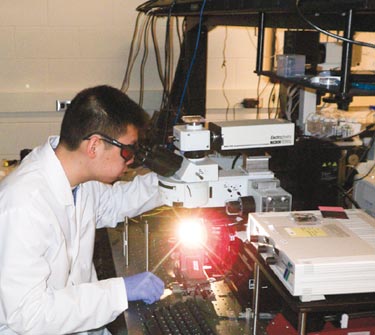 Tiny optofluidic components are fabricated from silicon, plastics and soft elastomers using lithographic techniques perfected over the years in the semiconductor industry. The fluid channels can vary in width from tens of nanometres to hundreds of micrometres – a range that spans from much smaller than, to much larger than, optical wavelengths.

One of the best examples of the utility of optofluidics is flow cytometry, a technology almost as old as the laser itself. In a flow cytometer, blood cells flow in a narrow, fast jet through an optical beam, and the scattered light yields information about the cells' characteristics. Medical technicians diagnose diseases and track treatments with flow cytometry. For example, parasitic and bacterial infections produce different types of white blood cells, a difference that can be detected with cytometry.

Although commercial flow cytometry machines have been widely used since the mid-1970s, engineers are fascinated by the advantages to be gained by applying microscopic optofluidic technology to the process. Because each cell can be individually interrogated, greater precision and sensitivity are possible. And after they've been analysed, the individual cells can be manipulated and sorted using elegant optical techniques.

Far greater sensitivity with microfluidic cytometry can be achieved, for example, with the microring resonators developed by Michael Lipson's group at Cornell University (Ithaca, NY) and elsewhere. A microring is a tiny, circular waveguide resonator, perhaps 100 µm in diameter, in which resonant photons can make thousands or even millions of circuits. Thus, a cell or molecule inside the ring can be sampled thousands or millions of times, as opposed to a single sampling in macroscopic flow cytometry.

Optical tweezers were developed in the 1970s at Bell Laboratories (Murray Hill, NJ) by Arthur Ashkin and others. The principle allows an individual particle to be "trapped" – as if it were being held in a pair of tweezers - at the centre of a focused laser beam. For particles significantly larger than the laser wavelength, the effect can be understood as a simple consequence of momentum conservation. Researchers at Genoptix (San Diego, CA) have demonstrated a compact optofluidic cytometry system that combines optical sensing with optical tweezers to separate cells into different collecting bins.

Changhuei Yang is a scientist at the California Institute of Technology (Pasadena, CA) and one of the pioneers in the field of optofluidics who has authored or co-authored several seminal papers. He believes that the ultimate goal of microfluidic cytology should be microscopic cytometer units implantable in human beings.

"They would provide an always-on window into blood dynamics that could diagnose the onset of illness before the symptoms present themselves," he says. Going a step further, Yang even foresees the possibility of cancer-cell-destroying microchips circulating in a patient's bloodstream, blocking the disease's spread beyond the original tumour.

Fluid dynamic Yang isn't alone in his enthusiasm for optofluidics. An internet search on the term today produces more than 100,000 hits, compared with barely 20,000 a year ago. But numerous challenges remain before a truly self-contained lab-on-a-chip can be realized on a large-scale commercial basis. In laboratories around the world, researchers are addressing these challenges with encouraging results.

Several investigators, for example, have developed tiny microfluidic lasers to serve as the light source on these chips. The inherent flexibility of optofluidics can lead to lasers with operating parameters – wavelength, spatial mode and temporal characteristics – that can be varied by varying the working fluid or the very shape of the device.

A microfluidic dye laser demonstrated by Demetri Psaltis and Zhenyu Li at Caltech is based on a distributed-feedback grating fabricated into a rectangular flow channel 2 µm wide by 5 µm high. The dye flowing in the channel has a higher refractive index than the surrounding material (polydimethylsiloxane, PDMS), so the channel functions as a tiny waveguide laser when pumped from the side with a frequency-doubled Nd:YAG laser.

The narrow channel forces the laser to oscillate in a single transverse mode, and the narrow feedback of the grating forces it to oscillate in a single longitudinal mode. Moreover, the Caltech investigators were able to tune the laser's output across 60 nm – from the yellow to the red – by stretching and compressing the flexible PDMS between a pair of mechanical micrometer stages. Changing the length of the flow channel changes the period of the grating, and hence changes the wavelength of the feedback. Two different laser dyes are required to span the 60 nm range.

Psaltis, now working with the Swiss Federal Institute of Technology (EPFL) in Lausanne, Switzerland, explains that funding in the US began with the Defense Advanced Research Projects Agency (part of the US Department of Defense) allocating research dollars to teams at Caltech, Harvard, the University of California at San Diego, and Stanford.

Proposals for a renewal of that funding have been submitted, Psaltis says, but meanwhile other US federal agencies, like the National Institutes of Health and the National Science Foundation, have begun funding optofluidics as well. He says that there is no single source of optofluidics funding in Europe.

Psaltis and Li's laser emits its beam parallel to the plane of the chip, making it useful as an optical source for other components on the same chip. Another Caltech group, led by Axel Scherer, has developed a surface-emitting optofluidic dye laser, the output of which might be used, for example, to transmit data to a receiver outside the chip. Scherer and colleagues fabricated a microresonator with radial distributed feedback. Picture an old 78-rpm record shrunk down to 200 nm in diameter. The circular grooves are a diffraction grating which, in one order of diffraction provide radial feedback across the surface of the disk, and in another order of diffraction provide the output coupling to squirt the beam straight up, perpendicular to the disk. The beam can be emitted into space or, according to Yan Chen, a member of the research group: "We could also couple the laser output into an optical fibre."

Material science PDMS is often the material of choice for optofluidics because it's easy and inexpensive to mold into precision parts, and because it's flexible. As in the case of the linear dye laser above, the flexibility allows device tuning simply by changing the shape of the medium. But the large, external micrometer stages that stretched and compressed the distributed-feedback laser at Caltech are at odds with the goal of making optofluidic devices compact.

A clever alternative has been devised by Psaltis and his colleagues at EPFL and Caltech. They have etched a linear grating surrounded by micro-airbags into a PDMS chip. By inflating the bags at the ends of the grating, and deflating those at the sides, they compressed the grating. Reversing the procedure stretched the grating.

The micro-airbag concept is consistent with previously demonstrated, pneumatic-actuated optofluidic devices, according to Song Wuzhou, a member of the EPFL group. He explains that "multiplexed pneumatic valves can share the identical external gas source for simultaneously controlling the liquid flow and optofluidic elements on a single chip."

The EPFL researchers are currently extending their work, exploiting the flexibility of PDMS from gratings to other optical components. For example, they have demonstrated variable attenuators and optical switches in which PDMS is compressed or stretched pneumatically to allow or frustrate total internal reflection.

Meanwhile, Alex Scherer's group at Caltech is exploring another aspect of working with PDMS. Often it's desirable to use metallic components (e.g. for mirrors and for gratings) in optofluidic devices, but depositing metal on the soft elastomer is difficult and expensive. As an alternative, Scherer and his colleague Zhenyu Li have flowed a metallic liquid into hollow forms fabricated in PDMS. They elected to use a gallium-indium-tin eutectic alloy rather than mercury. The alloy is nontoxic, non-evaporative and it has higher reflectivity and lower density than the element.

But using liquid metal rather than metallic coatings has an additional advantage, Li says. "We can make mechanically stretchable diffractive optical elements and adaptive mirrors by filling liquid metal into PDMS." The components' characteristics can then be adjusted by employing micro-airbags, for example, or perhaps by varying the pressure applied to the liquid metal. Even if an expensive, solid metallic coating were applied to PDMS, stretching or compressing the component would destroy it.

A lighter touch On the one hand, optofluidics provides a mechanism for manipulating light efficiently; on the other, it requires mechanisms to manipulate the flow and pressure of fluids. While electrically driven pumps and valves can push fluids around, the ultimate solution would be to control fluids with light. At Cornell University, a group led by David Erickson is developing a simple technique to do exactly that.

Erickson's group uses a thermorheological fluid, one which undergoes a reversible sol-gel transition when heated with a small amount of laser light. By selectively illuminating one branch of a bifurcating channel, it gelled the fluid in that channel and diverted all of the flow to the other one. When the team turned the laser off, equal flow resumed in both channels.

Switching time was approximately 1 s, according to group member Mekala Krishman. "The gelation times of the fluid we used are on the order of a few milliseconds, so we definitely expect that these switching times can be lowered by controlling the heat transfer in our system more efficiently." She added that a few milliwatts of 405 nm laser illumination resulted in the 1 s switching time, when the channel substrate was coated with an absorbing layer of material like indium-tin-oxide or gold.

Erickson finds optofluidics funding within the US to be "robust", moving from exploratory financial backing five years ago to applications-oriented funding today. "Already there are a number of companies that are funding lab-based research with the aim of having products out there in the next few years."

So, is the topic of "optofluidics" likely to become a cocktail-party talking point in the coming years? "Wait and see," Erickson grins.