Although the laser micromaterials processing market has taken a clobbering this year, growth is set to return in the medium term, opening up opportunities for laser vendors who are prepared to invest in R&D and new products. Tom Hausken of Strategies Unlimited predicts far-reaching changes across the laser supply chain.

Our recent market forecast concluded that sales of lasers for micromaterials processing will take a 40% hit this year. This is drastic, but the Great Recession is not news anymore and the semiconductor tool business is already turning around after falling since 2007. Other markets, like solar cells, have further to go to recover, and the automotive sector may be even slower yet. But there is enough growth to bring the market for lasers in micro materials processing to $460_m (€314.4 m) by 2013. That isn't all. The downturn will bring changes in market share as technology marches forward. 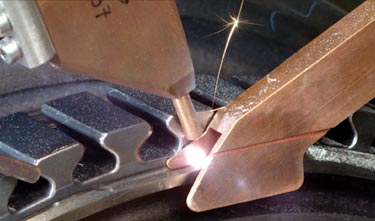 Our definition of the "micro" category includes lasers that are used for lower-power welding, cutting, drilling, microfabrication, additive processes, heat treatment and lithography. We don't count kilowatt lasers at all, nor do we count marking and decorative engraving. These lasers are used to make semiconductors, solar cells, medical devices, jewellery, electronics, consumer products and a wide range of industrial parts.

The micromaterials processing market, and the laser market in general, is highly fragmented. That is, it is segmented many different ways, such as by end-use, optical power, wavelength, pulse type, sales territory, etc. So much so, in fact, that laser vendors don't really sell standard products. Instead, a wide range of vendors sell a wide range of products to a wide range of customers.

There are exceptions, but those exceptions end up being so narrowly defined that they prove the point. For example, Cymer and Gigaphoton are the exclusive vendors of big excimer lasers for silicon lithography. It is a very consolidated segment – one that uses a very specialized type of laser for a very specialized application, and lithography just happens to be a sizeable end market. The laser market is full of examples like this.

The search for the next big thing The levels of high fragmentation and specialization means that application development is key. Sales are fragmented among a diverse set of processes, applications and industries, and sales to any particular application are only in the tens to hundreds of lasers per year, at most. Vendors that work closely with customers to develop new applications can capture market share as sales grow. Because unit sales are limited, much of the emphasis is on identifying these next new applications before the competitors do. Everyone is searching for the "next big thing" – relentlessly.

When sales are divided among so many applications, though, something happens that we call the "early peak effect". This is typical of capital equipment sales. It happens when you sell some lasers into a new application, and then sales drop off when the customers have installed all the lasers they need. It's so typical of the micromaterials processing market that we considered it in our forecast.

Figure 1 illustrates how the sales for a new application might evolve. The specifics of the chart (such as the years or the proportions) are not intended to be precise. The point is that many new applications follow this path (and some do not). 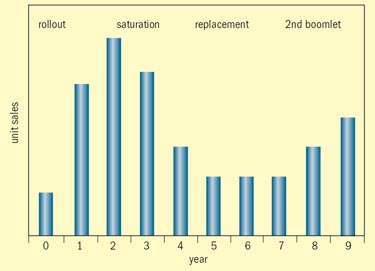 Laser sales are initially low, and then spike as a key end user (or users) races to adopt the new technology. Word gets around the industry, and other laser suppliers begin to orient products to the new application. Saturation comes quickly, though, and sales decline, even as competitors continue to flood the market with products. Replacement sales begin to dominate as the first lasers wear out or become obsolete, but the perception that there are strong sales into the application can persist long after the peak has passed. Eventually, a second peak may come years after the first when a large number of original lasers wear out together, or the technology takes a new turn.

The market share in a new application often goes to the laser vendor that had the luck or the persistence to be a partner in the application development. Once the early peak in sales fades, the supplier may continue to benefit from continuing sales, adding to an earlier base of laser sales. Word gets out into the laser community, but often it is too late – the early peak is already past, and stealing market share at that point is difficult. Everyone returns to looking for the next big thing. And so it goes.

Examples in the micro category abound. Razor blade welding, stent cutting, drilling holes in turbine blades, using fibre lasers for pre-press printing tools, cigarette-filter hole drilling, stereolithography, memory repair and pacemaker welding are all examples of applications that are now relatively mature. That is, the early peak is over, in some cases many years ago, and the annual laser sales into the application are tens of units, at most the low hundreds of units.

A more promising application is one that can expand into other, related applications. Medical device manufacturing is a good example, where there is a wide range of medical tools that need high-quality drilling, cutting or welding using lasers. Another promising area is solar-cell manufacturing. Each laser-based process is very specialized, but the scale of solar-cell production in coming years suggests strong overall laser sales in a segment that didn't exist just a few years ago.

Electronics manufacturing offers some other exceptions. The sheer volume of mobile-phone handsets, circuit boards, batteries, inkjet nozzles and so forth requires a vast infrastructure of machine tools, much of it laser-based. Handset sales are now over one billion per year, or about 20 every second, running 24/7. The early peak effect is there too, but the laser sales for replacing tools owing to wear-out and general industry churn is substantial.

If you don't account for the early peak effect, you can overestimate laser sales by assuming that sales continue at peak levels, year after year. The news of new applications have surprisingly wide reach in the trade press and technical conferences, feeding the perception that sales are higher than they really are. The perception can linger for years, especially among peripheral suppliers, and especially if the application has a "cool" factor, like stent cutting. 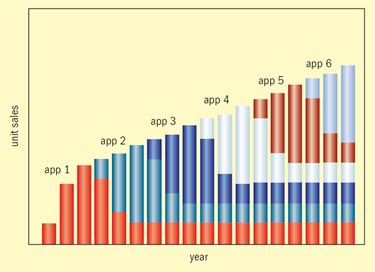 One way round this is to build market share by diversifying across many different applications and types of lasers. It's no surprise that Coherent, Rofin-Sinar and GSI are leaders, because of this diversification, with over 50% market share in the micromaterials processing category (see figure 3). In each segment, they compete in the same way everyone else does, but they sell in a lot of segments. Coherent is strong in CO2 lasers, excimer lasers and diode-pumped solid-state lasers. Rofin and GSI are strong in multiple categories too (don't forget that Rofin includes other brands like Lee Laser, and GSI includes Excel Technology, including Synrad). Of course, many companies are also diversified across other laser applications apart from the micro category, but that isn't counted here. 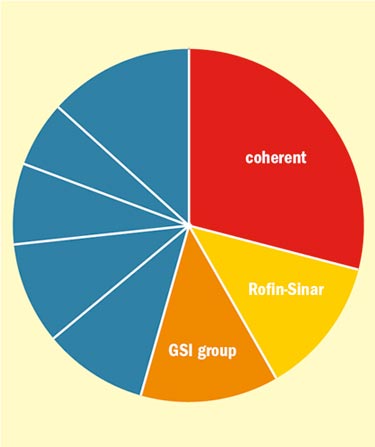 Another approach is to move up the supply chain and sell laser-based systems. Newport is doing this with its laser-based systems for solar-cell manufacturing, using lasers from its Spectra-Physics brand. Rofin-Sinar and Trumpf strongly emphasize their system products in the micro category. In other laser categories, like laser-based medical tools, the system vendors commonly make their own lasers, rather than buy on the merchant market.

The downturn changes everything The current downturn now threatens the existing order. Because the recession is so broad, it hits every sector in the economy, and the supply chain for every application can be disrupted.

First, market shares of system vendors change as system sales decline. This changes the shares of the laser suppliers, too, but more importantly, it changes their prospects coming out of the recession. This opens up opportunities, especially for laser suppliers that have invested in R&D and new products. They can offer advanced products to system vendors while others are still recovering from the recession.

Meanwhile, laser technology, as mature as it is, isn't staying still, especially in the micro category. Innovations like pulse-shaping fibre lasers, higher-power green lasers and picosecond lasers, to name a few, are emerging as alternatives to older products. These technologies won't displace the incumbent products on their own, but rather will restrict them by elbowing them into new niches.

The coming changes won't have the topsy-turvy feel of changes in market share that happen with, for example, smart phones. The "long tails" in laser applications and the diversification of the larger laser suppliers make the market more stable than that. But the changes in customer shares combined with the forward march of laser technology ensure that the market won't simply return to the way it was before the Great Recession.