Until now, NanoScan beam profilers from Photon Inc (San Jose, CA) have measured beam profile and power, but not the actual repetition frequency of the laser. Instead, the user entered the nominal frequency into the NanoScan software, and this figure was used to generate the beam profile. 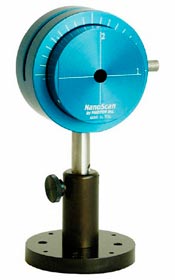 "Often the data that the user entered was not the actual frequency at all, leading to unwanted distortions in the profile," Derrick Peterman of Photon Inc told optics.org. "A much better approach is for the sensor to measure the frequency directly instead, eliminating any error and leading to much more reliable profiling of pulsed beams."

That capability has now been added to all NanoScan profilers, after the company investigated a number of potential solutions. "The usual technique would be to apply a fast Fourier transform operation to the data stream, but we found that was not reliable enough," said Peterman. "So instead we developed an alternative and proprietary algorithm to determine the pulse repetition rate of the laser."

The philosophy behind the change is to allow users to do more with less kit – and without adding to the cost. "You can measure pulse-repetition frequency directly with a photodiode, but you won't be able to obtain the beam profile or the beam power," Peterman noted. "That kind of additional analysis would need more equipment and more time spent testing. So one instrument simultaneously measuring these parameters alongside the pulse-repetition frequency can save customers time and money."

Repetition rate is especially important in materials processing, where the laser is scanned across a surface and overlapping pulses are used to scribe a line or cut through a sample. If the laser is not pulsing at the rate intended, the scribe line will have breaks in it, the cut will be jagged and require rework, or the process will simply be inefficient.

Peterman explained: "We saw one application where NanoScan analysed a laser being evaluated for a major OEM application, and found it was pulsing at one-fifth of the repetition rate that the laser manufacturer claimed – a long way outside the design specifications. In talking with the laser manufacturer, they were clearly unaware of this discrepancy."

Photon Inc offers the pulsed measurement option as standard with each product in its NanoScan range. This includes models with a silicon detector for operation at 350–1000 nm, those using a germanium detector for 700–1800 nm wavelengths, and the NanoScan with a pyroelectric detector for 190 nm to 20 µm wavelengths. Beam powers of up to 1 kW can be handled for certain wavelengths.

In addition, courtesy of a scanning-slit technique, NanoScan is claimed to accurately measure CW beams as small as 4 µm and as large as 20 mm.