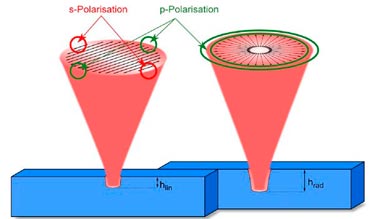 In response to the rapid growth in the photovoltaics market, manufacturers and laser specialists in Germany are joining forces to boost the throughput of silicon solar cells by up to 50%. The KOMET consortium aims to evaluate the merits of radially polarized laser light in order to improve cutting precision and efficiency, and hence increase production capacity.

"The aim of the project is to develop a laser that emits radially polarized light for materials processing and to evaluate the performance of this laser in industrial applications," project coordinator Bernd Schäfer told optics.org. "We believe that this is the first example of systematic research in using radially polarized light for a direct industrial application."

When it comes to the quality and efficiency of laser materials processing, a key role is played by the polarization state of the radiation beam – in other words, the direction of oscillation of the laser's electric field. Polarization, for example, dictates the beam's focusability, among other things.

Up to now, fine cutting of brittle-hard materials such as silicon has made use of a laser with a circularly polarized beam. In contrast to a linearly polarized beam, the quality of the cut is not dependent on the cutting direction and results in state-of-the art industrial cutting.

Now, however, the KOMET project plans to further enhance the coupling efficiency and focusability of the laser beam independent of cutting direction by employing radially polarized light. 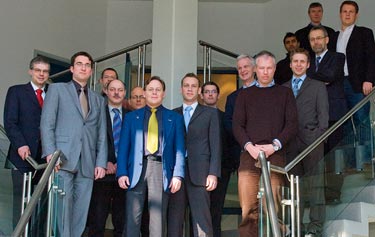 The KOMET project comprises a number of research institutes (including the Fraunhofer Institute for Laser Technology, Aachen, and the Laser-Laboratorium Göttingen) working in collaboration with seven industrial partners. It is the job of the industrial members of the consortium to develop the laser components and evaluate the performance of the final demonstrator.

By the first quarter of next year, the consortium hopes to have built a prototype system comprising a conventional laser and an external polarizer. The following year should see a prototype of the modular laser system with internal resonator and polarizer, with the final demonstrator scheduled for 2012.

At a wavelength of 1064 nm, the laser will be designed with an output power of a few hundred milliwatts (master oscillator) or up to 30 W (power amplifier), respectively.

According to Schäfer, all laser cutting applications and other applications in laser-based material processing, such as drilling, stand to benefit from the project. "Fine cutting has been chosen as the main focus of the project because of the moderate needs in laser power for this application," he said.

Manufacturing of the laser components is due to begin next month.