An artistic take on trace analysis

A study that reveals the secrets hidden in ancient art objects could provide forensic scientists with a new analytical tool. Marco Leona of the department of scientific research at the Metropolitan Museum of Art in New York has improved on an established optical technique to detect the earliest known dye used by ancient artists and, in doing so, has opened the door to any application where trace evidence is important (Proc. Natl Acad. Sci. doi:10.1073/pnas.0906995106). 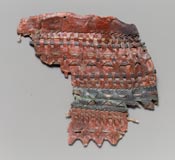 Researchers use historical records of organic pigments, made from plants and other natural materials, to map ancient trade routes, identify relationships between various works of art, detect forgeries and place artwork in historical context.

In recent years, non-invasive techniques such as Raman, fluorescence or UV-visible spectroscopy have been the methods of choice to identify materials used in works of art. The drawback, however, is that these techniques are not sensitive enough to identify some of the most important compounds used by artists and industrialists – organic dyes.

The problem is that organic dyes are typically used in very low concentrations and their UV-visible absorption or fluorescence spectra are not specific enough for identification. Furthermore, they are too fluorescent for Raman detection.

Leona turned to surface-enhanced Raman scattering (SERS), a technique that until now had remained largely a laboratory curiosity. "SERS is a great technique, but it is difficult to make work reliably for analytical purposes," Leona told optics.org. "We show that it can be used routinely to supplant other techniques when it is impossible to extract but the tiniest samples."

In the approach, silver nanoparticles are added to the sample and irradiated with laser light. When the incident light strikes the nanoparticles, localized surface plasmons are excited and the resulting Raman spectra can be measured.

The technique leads to extremely high Raman scattering from just a few thousand molecules. While traditional modalities have not been sensitive enough to detect the dyes in the miniscule samples of organic pigments available from most archaeological objects, Leona's approach requires only a 25 µm diameter sample and takes about 25 min from start to finish.

"Our work shows a new field of application and points to similar applications in forensic science and in any field where trace evidence is important," added Leona. "[Other] possible applications include pharmaceutical analysis [and] biomedical diagnostics – by itself and in combination with the use of antibodies."

Leona is now working on creating the first SERS spectral library and on new techniques for non-destructive analysis.