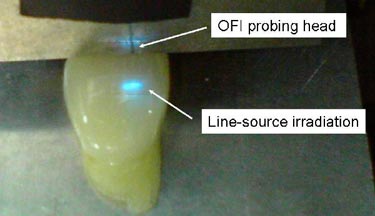 Your dentist's verdict on the health of your teeth could be made more accurate, thanks a new physics-based technique developed by scientists in Australia and Taiwan. Developed by a team led by Simon Fleming at the University of Sydney, the technique involves using laser-generated ultrasound to probe tooth enamel elasticity without needing to scratch the surface of teeth. Writing in Optics Express, the researchers say that their method could also detect decay at an earlier stage than your dentist would by just peering and poking in your mouth.

In Fleming's new technique, an area of tooth is illuminated and heated with a laser, which causes it to rapidly expand and initiate an ultrasonic surface acoustic wave (SAW) that then propagates outwards. The SAW vibration only penetrates around one wavelength deep into the material, and the velocity at which it travels along the surface is governed by the material's elasticity. The elasticity of a tooth, which indicates its level of mineralization, and hence its healthiness, decreases as the tooth decays. Therefore, measuring the speed of the SAW vibration in a tooth can indicate how healthy it is.

Fleming concedes that at first he had his doubts that this technology would be suitable in dentistry. "I asked myself, 'Are we really going to fire lasers into someone's mouth and make their teeth ring like a wine glass?'" he said. However, after carrying out a series of trials, the researchers soon realized that the technique would be safe. "As a remote, non-destructive technique it is applicable in vivo and opens the way for early diagnosis of tooth decay," he added.

The introduction of a non-destructive technique for probing teeth is likely to be warmly welcomed by squeamish patients. At present, the most commonly used method for measuring enamel elasticity, called "nano-indentation", involves scratching the surface of teeth to gauge the mechanical response of the surface layers. Although the SAW method has only performed on extracted teeth, Fleming and Wang hope to develop the technique to make it suitable for use in the mouth. "We're envisioning a probe about a centimetre in diameter," Fleming said.

To test their technique, the researchers fired 266 nm ultraviolet light from a solid-state laser through a cylindrical lens at two teeth. The beam pulses once per second for 5 ns, creating an ultrasonic SAW vibration. Wang measured the changes in SAW velocity by shining a second laser at the tooth up to 10 mm from the original beam. The laser interacts with the SAW and then a proportion of light reflects back into an optical fibre, where it is collected and used to evaluate the properties of the surface.

"The ability of this technology to provide quantitative information and detect changes in the re-mineralization of enamel provide a unique opportunity not available using existing technologies in the dental clinic," said Michael Swain, a dental and biomaterials researcher at the University of Sydney, who was also involved in the research.

Brian Culshaw, who performs research into laser-generated ultrasound at the University of Strathclyde, UK, agrees that it could be relatively straightforward to produce a probe for direct dental measurements. He points out, though, that no actual measurements of elastic modulus are presented in the paper, so the method cannot be compared with previous assessments of the mechanical properties of tooth enamel. "Much has to be done, probably in vitro, before the real usefulness of the tool can be evaluated," Culshaw said.