LaserFest 2010: it's time to take the laser to the people

Marking the laser's 50-year journey from the first flash of coherent light, Thomas Baer tells OLE why it's time to celebrate one of the great inventions of the modern age.

LaserFest is a year-long outreach event that is being planned for 2010 to mark the 50th anniversary of the first demonstration of the laser. Starting out as a discussion between the American Physical Society (APS) and the Optical Society of America (OSA), the celebration has grown to involve a large number of scientific societies and turned into a global event to publicize the laser and honour the people who have contributed to its development and commercial exploitation. 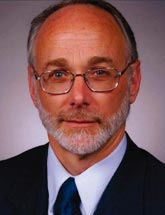 Caryl Richards talks to Thomas Baer, president of the OSA and executive director of the Stanford Photonics Research Center at Stanford University, CA, about the year of the laser.

Can you explain the thinking behind LaserFest? The laser is one of the greatest inventions of the last century. "Laser" is among the top 10 most frequently mentioned inventions in the title or abstract of patents in the US Patent and Trademark Office database. The purpose of LaserFest is to convey this message to several different audiences: the general public, government officials, the wider scientific community and young people who are interested in science.

That's a broad remit. Absolutely. One of our aims is to communicate to the general public the ways in which laser technology affects our daily lives. By the time you get up and drive to work, you have probably used lasers in a dozen different ways without even knowing it. At the same time, we want to draw worldwide attention to honour the people who invented and developed laser technology and are still active in the field.

Finally, we want to highlight the importance of learned and professional societies in disseminating information across the scientific community. It was through these organizations and their infrastructures that many groups around the world were able to communicate, and thus duplicate, improve and capitalize on, the original demonstration of the laser.

How are you involved in the project? The OSA and the APS have put substantial resources towards this event, helping to coordinate the celebration, though it goes well beyond those two societies. LaserFest involves most of the scientific societies and organizations that played major roles in the development of the laser.

Personally, I am interested in using the history of the laser as a wonderful illustration of why we need to make investments in fundamental science: because it can lead to unforeseen breakthroughs in technology and create whole new industries.

The last few decades have brought a new set of challenges, most significantly in the form of global warming. I am convinced that investments in basic science can lead us down the path to breakthrough technologies, including advances in optics and photonics that will be a key part of the transition from fossil fuels to renewable energy sources such as solar energy.

What headline events are planned? There have already been some celebrations, for example at last month's LASER World of Photonics show in Munich and at CLEO in Baltimore, MD. Future activities include creating special anniversary publications – in the general media as well as in our own OSA and APS journals – and organizing outreach exhibitions with local museums throughout the US and the rest of the world.

It is worth noting that there are 14 Nobel laureates in the OSA. Many of them used lasers as a major part of the work that led to their receipt of the Nobel prize, so we intend to recognize them as a part of LaserFest.

What opportunities are there for industrial participation? To date, the US industrial community has shown tremendous interest in being part of LaserFest. We have been working with some major laser companies and the leading trade shows. Participation could be in the form of displays at the major exhibitions and museums around the US or via sponsorship of upcoming events. For example, we are planning LaserFest activities at the annual meetings of the societies involved, such as the APS, the OSA, SPIE and the American Association for the Advancement of Science.

Where do you see laser technology going over the next 50 years? The large laser systems [like the National Ignition Facility in California] that are now coming online are remarkable. I expect to see lasers moving into regimes and applications where we have the energy and the capability to explore new ways of interacting with matter at the nuclear level – lasers creating the hottest temperatures on Earth and lasers used to cool atoms to the coldest temperatures ever measured.

Lasers are now providing such accurate and stable sources that we can test the stability of fundamental constants to see if they are changing as the universe expands. Basically, lasers are going where no lasers have gone before and far beyond what any of us had believed was possible.