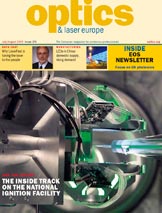 As recently as 2002, China imported all of its LED chips. The country now meets half of this demand with domestic production and is making the transition from incandescent bulbs to solid-state lighting. Richard Stevenson catches up with the progress.

The heat is on for the world's biggest laser

The National Ignition Facility in the Us is pursuing one of the grand challenges of science: controlled thermonuclear fusion in the laboratory. Our American correspondent Breck Hitz talks big science with Edward Moses, the director of NIF's multibillion-dollar research programme.

Picosecond lasers are a universal tool for ablating almost any material without the downsides of unwanted thermal side-effects. Bernhard Klimt and colleagues at LUMERA LASER explain how cold ablation has changed the face of micromachining.

LaserFest 2010: it's time to take the laser to the people

Marking the laser's 50-year journey from the first flash of coherent light, Thomas Baer tells OLE why it's time to celebrate one of the great inventions of the modern age.