Picosecond lasers are a universal tool for ablating almost any material without the downsides of unwanted thermal side-effects. Bernhard Klimt and colleagues at LUMERA LASER explain how cold ablation has changed the face of micromachining.

Industrial picosecond lasers have emerged as a revolutionary tool in micromachining applications over the last decade. More specifically, focused picosecond pulses are the enabling technology for cold ablation, a process that removes very thin material layers without significant thermal side-effects. Cold ablation can be applied to even the most complex materials, making the picosecond laser a universal tool for micromachining. 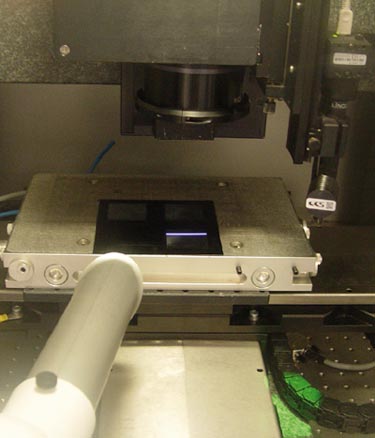 What's more, industrial packaging offers reliable and flexible lasers with tunable pulse energy, megahertz repetition rates and more than 50 W average output power. On the back of all that, picosecond lasers are now reaching a new level of machining quality for microstructuring of surfaces (e.g. microcutting and microdrilling), pushing the envelope on the key metrics of cost and throughput. 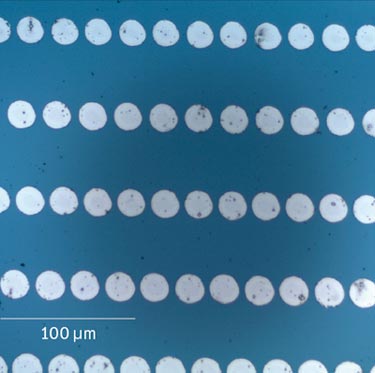 The best cut Pulsed lasers have long had success as a tool for micromachining applications. For more than 30 years, laser pulses in the millisecond to nanosecond regime have been drilling vias in wafers, cutting thin sheet metal and scribing ceramics alongside marking all kinds of products (from automotive parts, semiconductor chips and credit cards to golf clubs and passports).

Software control enables the lasers to perform the job flexibly and reliably without mechanical force, contamination to the part or wearing of the tool. Wavelengths can also be selected to deal with nearly any material, while power levels up to the kilowatt range ensure speed, throughput and low specific cost. 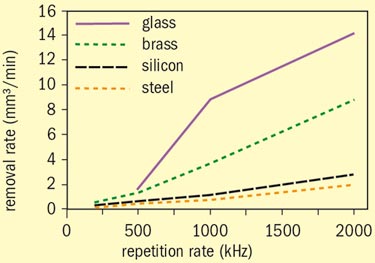 The downside is that all of these applications work on the principle of very fast local heating, melting and vaporization of the target material. Unavoidably, this can lead to undesired thermal side-effects like burr, recrystallization and micro-cracks, the consequences of which often only become apparent later in the product life.

At the other end of the scale, shorter laser pulses (in the femtosecond regime) require more complex lasers that deliver less average power at a higher price, but with limited improvement in micromachining quality. The higher peak power of femtosecond pulses can also complicate the beam-delivery system and is prone to unwanted nonlinear effects.

Picosecond laser pulses offer a solid compromise. Higher average power and repetition rates strike the right balance for higher throughput and improved reliability at a fraction of the cost of competing technologies.

Most picosecond-laser applications concentrate on creating surface structures by cold microremoval of material. A picosecond laser can be used, for example, to scribe a trench, cut a form, drill a hole, open an interior material layer, and isolate an area.

Practically all materials show an ablation layer of 10–100 nm thick if the energy density at the picosecond-laser focus spot is above the ablation threshold at around 1 J/cm2. The threshold varies only slightly in the range 0.1–2 J/cm2, depending on the type of material, the wavelength and the pulse length. The ablated material is pushed from the surface at high speed into a plasma cloud. Undistorted in its composition by melting effects, the plasma cloud is a stoichiometric representation of the bulk material and lends itself to precise spectroscopy. In appropriate experimental settings, the plasma cloud can be deposited to produce thin coatings of nearly any material on a nearby target. 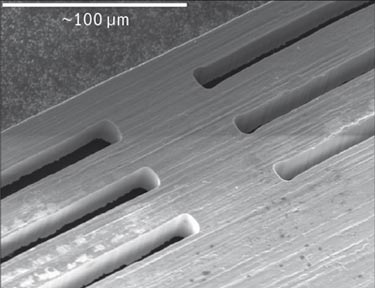 Focusing the ultrashort laser pulses into an at-least semitransparent material can alter the refractive index in deeper layers embedded in the material, creating stray light centres (e.g. to correct the critical dimension of lithographic masks) or waveguides (to channel optical signals, create sensors, multiplexers and so on). Laser-generated voxels with altered index of refraction or colour centres are also useful for internal marking under an intact surface (e.g. for product identification). 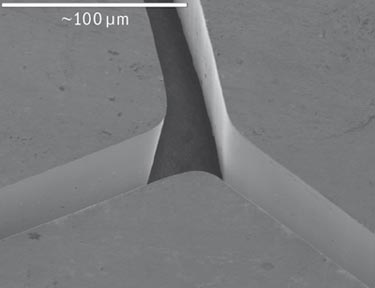 Cool customer Mechanical drilling, milling and electrical discharge machining (EDM) are over-stretched in reliability and specific cost when it comes to creating structures measuring less than 50 µm. Meanwhile, a high quality (M2 < 1.5) laser beam (~1 µm wavelength or harmonics) can conveniently be focused to spot diameters in the 5–50 µm range to create structures in the same size range.

Appropriate optics allow computer-controlled scanner systems to move the laser focus on the target surface with high speed and precision. A typical focus beam-diameter of 25 µm (from a 100 mm focal-length, telecentric flat-field lens in a galvo head) will require picosecond-laser pulse energies of about 10 µJ to satisfy the ablation threshold criteria.

In contrast to nanosecond-laser technology, a higher pulse-energy density will not necessarily work better or faster. The ablated plasma cloud becomes denser and cannot be dissociated from the surface as easily. As a result, it may thermally alter the material and destroy the "cold quality".

To ensure quality and throughput in picosecond-laser machining, it is therefore necessary to employ high repetition rates for the gentle elementary process. In this case, a suitable pulse-energy range for cold micromachining close to ablation threshold is found to be in the range 10–50 µJ. Some pulse-energy reserves for system losses and harmonic generation may also be needed.

A desired structure on the material surface is created by overlapping millions of pulses per second to form a continuous line. One picosecond pulse will typically remove a 100 nm layer. With 90% overlap between spot diameters, one pass will create a trench around 1 µm deep. Overlap of this order can be achieved using a 2 MHz laser along with a precision (e.g. 100 mm lens) galvo capable of moving the focus spot on the surface at 5 m/s (5 µm/µs) to shift the focus spot 2.5 µm between adjacent pulses.

It has been shown that the ablation rate scales linearly with repetition rate at constant pulse energy density. At even higher repetition rates, however, a shading effect from the plasma cloud of the previous pulse might eventually reduce the efficiency. In burst mode, several picosecond pulses with 20 ns separation have also shown substantial improvement to the ablation rate and micromachining quality (e.g. the surface roughness of blind holes at <200 nm Ra).

In another example, experiments with a 50 W LUMERA LASER Hyper Rapid picosecond laser operating in burst mode have yielded ablation rates up to 60 mm3/min and more. Good values in shallow applications with low aspect ratio (depth /diameter) are up to 20–60 mm3/min for glass; 10 mm3/min for stainless steel and silicon; and up to 100 mm3/min for organics and biological materials.

Driving a hard bargain Technology aside, industrial picosecond lasers have become more economical over the last four years. In fact, the photon cost (€/W) has dropped by a factor greater than 10. Even if investment in picosecond lasers of a certain power and beam quality is still considerably higher than for nanosecond systems, the total cost of ownership (including interest on the invested capital) for industrial use is of the order of €8–12/hour (i.e. less than €0.2/min). In return, end-users are able to machine or remove all manner of difficult materials (e.g. sapphire, glass, ceramics and fibre composites); even thermally sensitive materials (e.g. nitinol, organic LED structures and pharmaceutical layers) can be ablated.

One thing is certain: there is no shortage of application opportunities requiring the removal of a thin layer or small volume of material. Right now, picosecond lasers are being used in or gearing up for manufacturing applications across the semiconductor, photovoltaics and display industries, to name but a few. They produce micro moulds on demand – precise apertures and electrode structures, microstructured surfaces for the printing industry, embossed rolls and medical implants.

In heavy industry, too, picosecond sources are building momentum. In shipbuilding, for example, picosecond lasers are being considered for fashioning microstructures on the ship's hull for antifouling and friction reduction. Manufacturers have also produced injection nozzles and spinnerts, though cutting and drilling of thin glass materials is set to be another important application.

Such large-scale industrial applications will require picosecond lasers with mean-time between failure of a year and mean-time to repair of less than one hour. While the latest industrial picosecond lasers promise such performance under proper maintenance schemes, statistical evidence from long-term trials is still lacking.

In summary, the market for industrial picosecond lasers is predicted to grow by a factor of 10 in the next three to four years. Obtaining power levels of 500 W along with the advent of faster scanners and compact trepanning optics should reduce the specific cost and increase throughput, factors that are likely to prove critical for large-scale industrial usage.