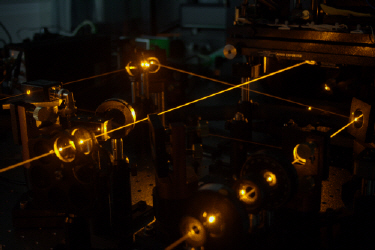 Researchers in Switzerland have made the world's smallest optical transistor ever from a single dye molecule. The device, which works by weakening or amplifying a "source" laser beam depending on the power of a second "gating" beam, brings all-optical circuits and optical computing a step closer.

Since the first laser was invented in 1960, scientists and engineers have dreamed about replacing electrons in circuits with photons. Here, glass fibres or waveguides on chips would act as cables and wires for light, and optical switches, transistors and diodes could be made. Photonic circuits would have many advantages over their electronic counterparts, including quieter signals, much faster signal transmission, less wasteful heat being generated, larger bandwidth and lower cross-talk.

Unfortunately, we are still far from seeing photonic circuits in desktop computers and other everyday applications because these circuits require light to be manipulated in nanoscopic spaces, something that is very difficult to do. Moreover, efficient mixing of light beams, which allows energy from one beam to amplify another, usually requires macrosized crystals. 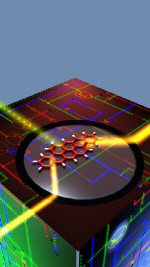 However, hope is around the corner thanks to recent progress in nano-optics, including Vahid Sandoghdar and colleagues' work at ETH Zurich. The researchers have now made an optical transistor from a single dye molecule and shown that a freely propagating laser beam (the source beam) can be attenuated or amplified by placing the molecule in its focus. "By controlling the degree of attenuation and amplification via the power in a second gating laser beam, we have demonstrated the smallest optical transistor to date," Sandoghar told our sister website nanotechweb.

The book-keeping is simple, he says: when the molecule is in an excited state, it has an extra photon that it can give away, therefore amplifying the beam of light.

The key to making the new optical transistor is the tight focusing of light onto a single molecule at ultra-low temperatures. This focusing provides strong light-molecule coupling that allows the molecule to affect the laser light. Although strong coupling between an atom and a laser beam has been achieved before, it was always in optical cavities, in which light–atom interactions can be enhanced. The problem here is that even the best optical cavities are larger than about a micron in size, which means that devices cannot be made any smaller than this.

In contrast, the cavity-free demonstration of light amplification by a single emitter in the ETH Zurich experiments could lead to high-density packaging of nanosized transistors. Theoretical calculations also show that it should be possible to build complex circuits where many single emitters are coupled to tiny waveguides that carry optical signals on a chip. "And although our experiment was performed with conventional laser beams, the set-up also works for non-classical light beams at the single photon level," explained Sandoghdar. "This means that quantum information processing will be possible."

The work was reported in Nature.

• This article first appeared on our sister website nanotechweb.