A new breed of solar-power collectors has been optimized for use in large-scale commercial deployments. 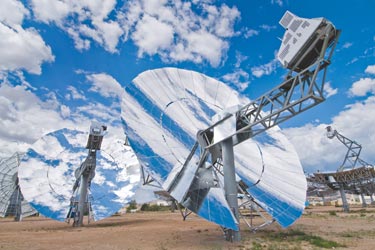 A US engineering team from Sandia National Laboratory, Stirling Energy Systems (SES) and Tessera Solar has unveiled solar-power collectors that have been designed for high-volume production, ease of maintenance and cost reduction. Called SunCatchers, the new dishes are expected to be used in commercial deployments early in 2010.

The new dishes build on the success of the original SunCatcher concentrating solar-thermal power system, but have been redesigned with improved collecting optics and fewer engineering parts. "Every part of the new system has been upgraded to allow for a high rate of production and cost reduction," said Chuck Andraka, the lead Sandia project engineer.

Six first-generation SunCatchers have already been built at Sandia's National Solar Thermal Test Facility in Alberquerque, New Mexico, and have been producing up to 150 kW of grid-ready electrical power during the day. Last year, one of these dishes set a new record for solar-to-grid system conversion efficiency of 31.25%, breaking the previous 1984 record of 29.4%.

Both versions of the SunCatcher operate on the same basic principle: precision mirrors are attached to a parabolic dish to focus the Sun's rays onto a receiver. Heat generated at the receiver is transmitted to a Stirling engine, a sealed system filled with hydrogen. The pressure inside the engine rises and falls as the gas heats and then cools, and this change in pressure drives a piston inside the engine that in turn drives a generator to produce electricity.

The latest version of the SunCatcher is the culmination of five years' work by Sandia and SES to improve the system design and operation. The redesigned collector is about 2300 kg lighter than the original, at least in part because its round shape requires less steel than the initial rectangular design. The revised design has also slashed the engine part count by 60%, and halved the number of mirrors from 80 down to 40.

Manufacturability has also been improved by borrowing ideas from the automotive industry. The reflective mirrors are formed into a parabolic shape using stamped sheet metal similar to the hood of a car; the mirrors are also made using automobile manufacturing techniques. Another significant innovation has been the development of a tool that can determine the effectiveness of the mirrors in less than 10 s, a task that took up to an hour in the earlier iteration.

"The new design of the SunCatcher represents more than a decade of innovative engineering and validation testing," said Steve Cowman, CEO of SES. "By utilizing the automotive supply chain to manufacture the SunCatcher, we're leveraging the talents of an industry that has refined high-volume production through an assembly-line process."

Tessera Solar, an SES sister company based in Houston, Texas, is now planning to build a plant that will use 60 SunCatcher units. The facility, which will be established in either Arizona or California, will have a power output of 1.5 MW, which is enough to power about 1200 homes.

The solar-dish technology will then be deployed to develop two of the world's largest solar generating plants: one with San Diego Gas & Electric in the Imperial Valley in southern California, and the other with Southern California Edison in the Mojave Desert. Together with a recently announced project with CPS Energy in west Texas, these large-scale facilities are expected to produce 1000 MW by the end of 2012.