In optics, the whole is greater than the sum of the parts

Networking between universities, start-ups and established industry vendors is a key driver of growth within the optics industry. Bob Breault tells OLE about the wide-ranging benefits of optics clusters. 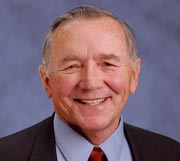 Bob Breault is president of Breault Research Organization (BRO), a Tucson, Arizona-based company that specializes in optical design software. Alongside the day job, he also heads up the Arizona Optics Industry Association (AOIA), an umbrella group that supports more than 300 optics-related companies in the Arizona photonics cluster. In the past decade, the cluster has grown tenfold, with member companies generating $2.3bn (€1.7bn) in aggregate revenues in 2006 and employing some 25,000 people.

Using the AOIA model as his template, Breault has helped to create more than 30 optics clusters worldwide and is now spearheading a scheme to create 100 new companies in Arizona in the next 18 months.

How do clusters benefit the optics business community?

Optics is still very much an emerging technology, with many small companies employing between five and ten people. This is why networking and partnerships are critical. Pulling together the businesses, financial and educational systems in a cluster can help to accelerate growth. For example, if your business doesn't have enough people to solve a problem, a cluster connection can put you in touch with someone who can.

What's more, because optics is a young industry, there aren't enough dedicated teaching facilities to create the required pool of researchers and specialist employees for industry. While centres like the College of Optical Sciences in Arizona are certainly helping (see Optics Careers Summer 2009 p4), the process is still too slow to keep pace with the rapid development of optics technology. We need to network and that's where clusters come into their own.

How can the cluster framework transform small- and medium-sized businesses into big companies?

Consider the semiconductor industry in the 1960s and 1970s. There were a lot of small companies that have since grown through partnership, mergers and acquisitions and linkages into the billion-dollar companies that we see today – the likes of Motorola and Intel. In my view, this is the future of the optics industry. Here in Arizona, five of the seven largest optics companies have been bought or gone through mergers over the last 10 years. I suspect in another 10 years, many optics companies will be pushing the $500m revenue mark.

Where does the initiative need to come from in the cluster model?

Businesses are the driving force that generates the money. They support the government, the education system and the research and should take a leadership role. University or government-led organizations are susceptible to changes in administrations and don't worry about the impact on the optics industry in particular. Business people have the greatest self-interest. If I run a 44-person company, I need to focus on day-to-day activities. When the economy heads south, I have to react. My livelihood depends on it.

Presumably other stakeholders have a role to play as well?

At a headline level, each country has its own unique speciality in optics, and so governments need to lower the restrictions on international trading if we are to maximize growth opportunities. Universities also need to do a better job of transferring technology, while legislators need to get up to speed and understand where and how fast optics is moving. Finally, we need to market our businesses more aggressively so that other industries understand that optics has a fundamental role to play in applications as diverse as automotive, medicine and renewable energy.

You've been instrumental in getting optics clusters working together. What are the benefits of such cluster–cluster interactions?

There is a term in the cluster community that's called "co-opetition" – i.e. understanding that businesses can still compete while working together on issues like regulation and education. I saw the benefits at a local level and took this concept to other countries. Every cluster has applied its own background and culture and we have learned from each other. We've done this with Canada, Malaysia, South Korea, Mexico and Germany. As a result, billions of dollars have been generated in these regions over the last four years.

Equally, big and small optics companies can benefit by having access to a wider network of specialists. It's simple enough: each country has its own area of expertise and can provide a solution to your problem that would otherwise take months to solve. A quick phone call to cluster leaders anywhere in the world can potentially get you an answer within 24 hours.

How do you measure success and what is your ultimate goal?

The greatest achievement of the cluster model is growth in jobs and in the number of optics companies. Arizona went from 2300 to 25,000 optics employees in 10 years and the number of optics companies has risen to 309 from 200 in the last five years. We need to watch not only what's happening within the industry, but also the impact that this has on the region. This includes the effects of revenue and average salary on the local economy and regional growth per capita. Finally, it is important to establish positive relationships between companies. You want to make sure that everybody benefits when you do this.

• For more information about BRO and AOIA, visit www.breault.com and www.aoia.org.

• This article originally appeared in the June 2009 issue of Optics & Laser Europe magazine.