Direct-diode lasers: they've got the power

High-power direct-diode lasers have emerged as a competitive option for applications like cladding, welding and heat treating. Stuart Woods of Coherent explains why the basic construction and operation of direct-diode systems translate into low cost-of-ownership.

Over the past decade, improvements in diode-laser fabrication and packaging technology have enabled the construction of compact, integrated systems with several kilowatts of output. These high-power direct-diode laser (HPDDL) systems offer a combination of excellent electrical efficiency, low maintenance and ease of integration, all of which contribute to a low cost of ownership unmatched by any other laser technology. As a result, HPDDLs are making inroads in a variety of materials processing applications. Before reviewing those applications in more detail, it's helpful to revisit the fundamentals of HPDDL construction and operation.

The edge-emitting diode laser is a semiconductor device that converts electrical energy directly into laser light. Typically, the highest output power is achieved in the near-infrared, most commonly at either 808 or 980 nm. While an individual diode laser produces only up to a few watts of output power, numerous emitters can be fabricated on a single, monolithic semiconductor substrate (called a "bar") for a total output as high as 100 W.

Because of the small size of diode-laser bars, they can be effectively cooled with a low volume of circulating water and a chiller. Figure 1 shows a mounting configuration for diode-laser bars called a microchannel-cooled package (MCCP). Here, the diode-laser bar is mounted on a plate having internal water-circulation channels. The MCCP contains two large water ports, for input and output, each with an O-ring at their respective edges. The O-rings provide a water-tight seal when two MCCPs are placed against each other, a feature which enables multiple MCCPs to be stacked together and water circulated through the entire assembly. The figure also shows just such an assembly of several MCCPs. The resulting stack is an extremely compact assembly that can deliver several kilowatts of power. 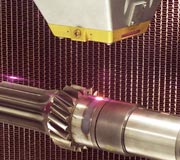 Unlike many other lasers, which produce a round, focusable Gaussian beam, the output of a diode-laser stack comes from numerous individual emitters spread over an area several square millimetres in size. Furthermore, diffraction at the micron-sized rectangular emitters causes each to produce an elliptical beam with asymmetrical divergence. Because of this, specialized optics must be employed in order to convert the raw output into a far-field format useful for most applications.

These collection optics utilize both cylindrical and spherical lenses to gather and collimate the output of the entire stack. This light can then be focused onto the workpiece directly (termed free-space delivery) or channelled into a single optical fibre, enabling remote (up to 30 m) delivery of the laser source from the processing area. A typical output beam from a free-space HPDDL system might be 12 × 1 mm at its point of focus, while a fibre-delivered system might produce a round spot that is only a few millimetres in size. Also, fibre delivery generally yields a higher power density (laser energy per unit area) at the workpiece compared with free-space delivery.