Will TRUMPF trump its rivals with TruDiode?

The first product in the new series of direct-diode laser sources from TRUMPF, Germany, will be on show at LASER 2009. 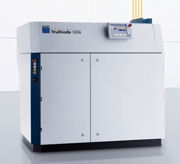 The TruDiode sources will ultimately replace the company's lamp-pumped CW systems, and the first product in the series is the TruDiode 3006.

"Direct-diode lasers have high beam quality, equivalent to that from lamp-pumped Nd:YAG lasers, even at power outputs in the multi-kilowatt range," said TRUMPF spokesman Holger Kapp. "Therefore they are the beam source of choice for welding applications that are currently performed with lamp-pumped high-power lasers."

The electrical efficiency of TruDiode lasers is claimed to be as high as 40%, far outstripping the levels possible with lamp-pumped laser systems. "The TruDiode 3006 on show at LASER features an output power of 3 kW," said Kapp. "Other lasers in the family will be launched during 2009."

The development of direct-diode sources follows other recent moves by TRUMPF to position itself in industrial laser markets, including the acquisition of UK fibre-laser specialist SPI Lasers in September 2008.

Last year, the company told optics.org that it was committed to developing all varieties of laser technology in order to offer customers "the best laser for every application in materials processing."