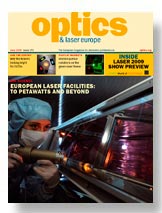 In the spotlight: OLEDs in a final push to market

OLEDs are making waves in the displays and lighting markets. Stefan Grabowski of Philips Research explains why.

The advent of cheap and efficient green lasers is eliminating one of the last remaining hurdles to the commercial success of laser displays and laser television.

GreenVolts of California is building a 2 MW power plant to demonstrate the commercial viability of concentrator photovoltaics technology.

A new generation of solid-state lasers

A radical rethink of solid-state-laser design is opening up growth applications in analytical instrumentation.

A trio of planned pan-European research centres will give scientists access to unprecedented laser powers and intensities.

Taking inspiration from the helical designs found in nature, Chiral Photonics is adding a new twist to optical technologies.

Direct-diode lasers: they've got the power

High-power direct-diode lasers have emerged as an attractive option for materials processing applications.

In optics, the whole is greater than the sum of the parts

Networking between universities, start-ups and established industry vendors is a key driver of growth within optics.