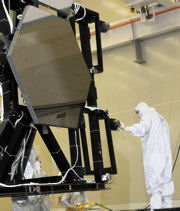 The first mirror segment that will fly on the James Webb Space Telescope has completed its initial series of cryogenic temperature tests in the X-ray and Cryogenic Facility at the Marshall Space Flight Center in Huntsville, AL, US.

The segment is the first of 18 mirror segments that will be joined to make a giant, 6.5 m diameter hexagonal mirror. During the test, the segment was subject to temperatures of –248 °C in a 215 m2 helium-cooled vacuum chamber at NASA Marshall.

"The tests performed here are crucial to the success of the programme since they will ensure the mirrors and components will be able to withstand the extreme cold temperatures of space," said Helen Cole, project manager for the Webb Telescope activities at NASA Marshall.

Engineers can model the changes in the mirror's shape as it changes temperature, but the modelling is not perfect. In the testing process, the mirror was polished to an accuracy of 100 nm, based on the changes predicted by the model. Then it was cooled down to cryogenic temperatures and the surface measured again, creating a "hit map" of unexpected changes.

"Now, engineers will warm it up and polish out the 'hit map' areas to get the mirror to 20 nm accuracy, a process that will take months," said Jonathan Gardner, Webb Telescope deputy project scientist at NASA Goddard Space Flight Center. "The mirrors will then be brought back down to cryogenic temperatures to verify the increased accuracy."

In addition to this testing, engineers will carry out cryo-cycling, raising and lowering the temperature without polishing in between, to test the repeatability of the changes.

The 18 mirror segments, each measuring 1.5 m in diameter, will be tested in batches of six and chilled to cryogenic temperatures four times in a six-week time span. It takes approximately five days to cool a mirror segment to cryogenic temperatures. All flight mirror tests are expected to be completed in June 2011, and the Webb Telescope is scheduled for launch in 2013.

Northrop Grumman is the prime contractor for the Webb Telescope, leading a design and development team under contract to NASA's Goddard Space Flight Center.