Light: the medicine of the future has arrived

Light as a therapy can heal injuries and reduce pain in humans and animals. James Carroll of THOR Photomedicine discusses the rapidly growing field of low level laser therapy.

In science fiction films, when someone gets injured they are taken to a hospital where the doctor uses a laser beam to heal the patient. This might seem unbelievable at first but the use of laser and LED light for tissue regeneration is already advanced in development and used by hundreds of pioneering doctors around the world. The use of laser and LED light as a therapy is called low level laser therapy (LLLT). These therapy systems are already being used to treat wounds, injuries, neck pain, osteoarthritis, the side effects of chemotherapy and radiotherapy, to name but a few. 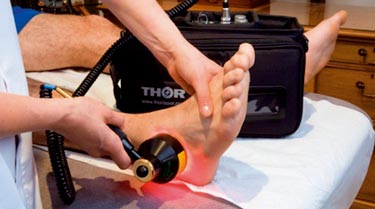 LLLT is being trialled on NASA manned missions into space and has been used in Antarctica and on US Navy submarines as, in these extreme environments, people do not heal very well after injury. Scientists are currently investigating the use of LLLT on sperm mobility, spinal cord injuries, stroke, and both Parkinson's and Alzheimer's disease. It is anticipated that this technology could be used in almost every hospital department throughout the world, bringing science fiction into reality.

Photosynthesis for humans
It is a common misconception that all medical laser treatments are destructive or tissue-heating procedures (such as cauterizing, ablating or excising tissue). The effects of LLLT are not thermal, they are photochemical. It is not a destructive procedure, it is comparable to photosynthesis.

One of the primary effects of LLLT occurs in the "power house" of human cells – the mitochondria. Certain wavelengths of light stimulate the enzyme cytochrome c oxidase, which is responsible for the production of the essential cellular energy (ATP) that human cells need to function, as well as modulating other biochemical molecules (reactive oxygen species and nitric oxide) that lead to ageing and cell death (oxidative stress). After LLLT, the cells have increased metabolism, they communicate better and they survive stressful conditions better, which in turn suggests that any disease or injury could potentially be influenced.

Dozens of universities across the world are publishing research and demonstrating improved tissue regeneration (in skin, muscle, tendon, ligament, bone, spinal cord and nerve tissue), anti-inflammatory effects and analgesia. A search on the US National Institute of Health online database (www.pubmed.gov) finds over more than 100 randomized double-blind placebo-controlled clinical trials and more than 1000 laboratory studies reporting on the phenomena of LLLT.

At BiOS 2009 (part of SPIE Photonics West) invited speakers from NASA, the US Navy, Harvard Medical School, the former editor of Grays Anatomy and I were among a dozen others who delivered our latest results and thoughts on the effect of LLLT on intracellular mechanisms and its clinical benefits. Research was presented on the effects of this modality for stroke recovery, restoring eyesight after laser injury, healing age-related macular degeneration, improving heart muscle after myocardial infarction, spinal cord injuries, sperm motility and my topic of dose rate effects.

The significance for patients and healthcare services is potentially huge. LLLT is proving to be more effective and cheaper than current drug therapies for many chronic, degenerative or painful conditions. It often works where drug therapies do not and has no side effects.