Physicists are on the verge of demonstrating perhaps the ultimate application of the laser: creating nuclear fusion in the lab. 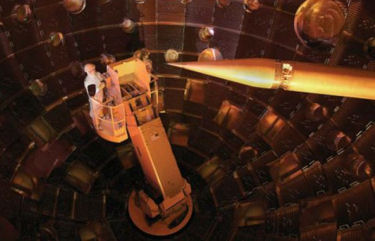 Getting to the point in the NIF target chamber

The US Department of Energy has given official clearance for experiments to begin at the $4bn National Ignition Facility (NIF) at the Lawrence Livermore National Laboratory in California. NIF is a huge facility consisting of 192 pulsed laser beams with a total energy of 1.8 MJ, more than 60 times more energetic than those from any machine currently in existence. The first experiments are expected to begin in May.

Ignition is a grand challenge. People have been waiting for this moment for a long time Ed Moses, NIF director

NIF's main goal is to focus all that energy onto a hollow sphere 2 mm in diameter made of beryllium and chilled to 1.8 K. This will make the sphere implode and squeeze the deuterium and tritium nuclei lying inside until they fuse to spark "ignition" – the point at which enough heat is generated to react surrounding fuel and achieve a sustained burn that produces excess energy. "Ignition is a grand challenge. People have been waiting for this moment for a long time," says NIF director Ed Moses.

Construction of NIF began in 1997 but did not go smoothly at first, with capacitors prone to exploding. Extensive redesigns were required, which led the US Department of Energy to re-evaluate the project and redraw its schedule and budget. NIF is now opening five years behind schedule and almost four times over budget.

Sparking fusion NIF is a huge facility – roughly the size of three football pitches. Each laser pulse starts out as a 1 µm infrared beam that is split into 48 beams and fed into preamplifiers that increase their energy 10 billion times. Each beam is then split into four and passed repeatedly through main amplifiers. After converting the wavelength into the ultraviolet, the total energy of the 192 beams is 1.8 MJ. When the combined laser pulse hits the 2 mm sphere, it explodes, causing an implosion on the inside that forces the fuel into the centre and compresses it to a density 100 times that of lead and a temperature of 108 K.

This is enough to spark fusion at the centre, which then burns outwards to cooler parts of the fuel. The fuel is trapped by its own inertia: the fusion burn proceeds faster than the fuel can move to escape. In theory, if all the fuel burns up, at least 20 MJ of energy will be liberated.

Moses says that NIF staff plan to ramp up the laser energy to 1 MJ this year and reach full power by the end of 2010, but predicts they will achieve ignition before then. "We're feeling pretty confident," says Moses. Mike Dunne, head of the Central Laser Facility at the Rutherford Appleton Laboratory in the UK, agrees that NIF is "overwhelmingly likely to succeed" but warns that the laser can set up "resonant waves" in the plasma that heat it faster than it can be compressed so that ideal ignition conditions are not achieved.

Giant planets, stars and supernovae Another potential problem is "hydrodynamic instabilities" that mix the beryllium of the sphere with the fuel, thus spoiling the plasma's ability to retain heat. NIF will also be used to validate computer simulations of nuclear weapons to ensure that the US nuclear stockpile is safe, while astrophysicists will use it to simulate the interiors of giant planets, stars and supernovae.

• This article first appeared on our sister website physicsworld.com