Optics.org speaks to the researchers who braved Mount Etna's most recent volcanic eruption in a bid to demonstrate the gas sensing capabilities of their lidar system. 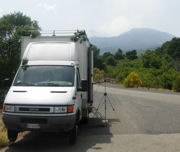 Researchers in Italy have developed a lidar setup that they say can be used to track the spatiotemporal evolution of volcanic plumes and could even play a role in eruption prediction. The team from the Italian National Agency for New Technologies says that its instrument, which uses a carbon dioxide laser could be pointed at the mouth of a volcano to monitor for tell-tale changes in gas concentration (Optics Letters 34 800).

"The transformation of gases inside a volcanic plume is not well understood," Luca Fiorani, a researcher in the Laser Applications Section, told optics.org. "Our research demonstrates that we can help to measure the flux rate of gases and even raise the alarm when gas concentration rises."

Fiorani and colleagues carried out lidar measurements 10 km east from the erupting Mount Etna in July 2008. As the wind blew the volcanic plume over the system, the group observed an extinction coefficient ranging from 10–5 to 5 × 10–4 m–1 with a spatial resolution of 15 m and a temporal resolution of 1 min. This performance, says the team, is adequate to follow the spatiotemporal dynamics of volcanic plumes.

"The system was operated in the elastic backscatter lidar mode, transmitting a wavelength of 10.591 µm," explained Fiorani. "The laser pulse interacts with atmospheric particulates and part of its radiation is backscattered toward a detector where it is transformed into an electronic signal."

Lidar systems that are traditionally used to detect aerosols use visible light. However, Fiorani's team opted for a CO2 laser. According to Fiorani, infrared light is practically insensitive to air molecules but is extremely sensitive to gas particulates.

The team now plans to make a 3D scan of the plume while simultaneously measuring the gas concentration within the plume using a differential absorption lidar.