Combining the properties of plasmonics with thin-film solar cell technology could disrupt the future of grid electricity. Caryl Richards talks to Kylie Catchpole at the Australian National University to find out more about advancements in plasmonic solar cells.

As demand grows for greener power generation and energy conservation, how can renewable technologies take on the might of goliaths of the fossil fuel industry? In the case of thin-film solar cells, the weapon of choice comes in the diminutive form of metallic nanoparticles. Thanks to a combination of the resonant plasmonic properties of metallic nanoparticles with thin-film photovoltaic technology, a new generation of plasmonic solar cell has evolved with similar performance to silicon cells but at potentially a fraction of the cost.

Today, plasmonic solar cells are emerging as promising candidates amongst many solar energy technologies spurring continuing research to improve device performance. One leading research group in this area is based at the Centre for Sustainable Energy Systems at the Australian National University (ANU) who are working alongside other principal groups led by Harry Atwater and Albert Polman at Caltech, California, US and the FOM-Institute, AMOLF, the Netherlands, respectively. 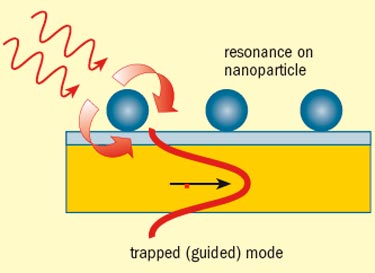 The group at ANU measured an enhanced photocurrent attributed to the increased trapping of light scattered into a thin-film silicon cell by silver metal nanoparticles excited at their surface plasmon resonance. Now, leading scientists in the field are looking to drive plasmonic solar cells out of the science of the small into the next big thing in the photovoltaics industry (Optics Express 16 21793).