The Texas Instruments DLP Pico Projector Development Kit and chipset has already attracted massive interest at trade shows in the US and Europe this year. Jacqueline Hewett asks Arun Chhabra of TI to explain why the technology has got the pulse of the photonics community racing.

The launch of Texas Instruments' (TI) first DLP Pico Projector Development Kit was enough to lure many a delegate to the company's booth at the Photonics West exhibition back in January. Based on TI's established digital light projection (DLP) technology and with a retail price of just $349 (€272), the kit is an easy way for developers to embed light manipulation technology into their applications. 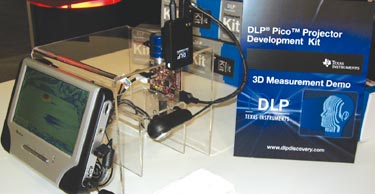 One month on and TI was in the headlines again, this time making a big splash at Mobile World Congress, which was held in Barcelona, where it unveiled the first mobile phone with embedded projection technology. Developed in conjunction with Samsung, the phone uses the TI DLP Pico chipset and is set to hit the European market this summer.

Hard to believe, but it doesn't end there. TI also announced a new addition to its DLP Pico family in Barcelona with availability slated for late 2009. The second chipset will have a higher resolution than its predecessor. All things considered, it seems like 2009 is set to be a big year for TI and for the wider photonics and projection communities in general.

What is DLP?
TI has been shipping its DLP technology for over 12 years now and has deployed an impressive 20 million units in that time. The initial target markets were conference- and office-room projectors, high-definition television and digital cinema, and indeed those businesses remain stable for TI to this day.