An optical method is unravelling the secrets of photosynthesis - one of nature's most efficient solar energy processes.

Scientists are one step closer to understanding how photosynthetic molecules transport energy with such high efficiency thanks to a powerful optical method called angle-resolved coherent (ARC) wave mixing. The method can be applied to real-world devices that utilise sunlight, which could lead to more efficient solar cells. (Phys. Rev. Lett. 102 057402)

"Photosynthesis is a good example of where nature transports energy efficiently from one place in a molecule to another. It's this transfer process that we have been studying," Ian Mercer of University College Dublin, Ireland, told optics.org. "We know that electrons are the mediators of energy transport in molecules. What we don't know is the design rules for how these electrons hand the energy on to each other."

Researchers have used various laser-based techniques in the past, many based on the principle of four-wave mixing, to attempt to understand the complex interactions between electrons in molecules. Common problems with these methods include over-exposing the sample to laser light and causing degradation as well as the need for intensive computer processing.

"We estimate that ARC is up to 1015 times faster than previous four-wave mixing approaches for revealing coupled electrons," said Mercer. "Our results are instantaneous snap-shots of energy being transported between electrons that give you a significant amount of information in parallel. No computer processing is required to form a map or to distinguish electron coupling mechanisms for isolated features."

A pulse of many colours

The starting point in the team's ARC system is a femtosecond laser emitting millijoule pulse energies at kilohertz repetition rates. The emission is fed into a 1 meter long hollow fibre filled with an inert gas which creates a very stable beam and pulses with a broad coherent bandwidth.

"The fibre takes a 30 fs pulse with a bandwidth of about 30 nm at 800 nm and spreads that out to cover 650 up to 900 nm," said Mercer. "What's crucial is that these colours are all coherently related to each other, which allows us to probe a broad range of energy levels in the sample". The fibre development was led by John Tisch and Jon Marangos at Imperial College London and the technology was subsequently used with the Rutherford Appleton Laboratory's Astra laser.

The pulses then pass through a diffraction grating placed at the object point of a telescope (with the sample being at the image point), which generates four beams. Mercer and colleagues block one of the beams and mix the remaining three at the image point.

"This generates new light out of the sample at specific angles governed by conservation of momentum," explained Mercer. "By putting a CCD camera at the right place, all of the angles go to different places on the camera. You get one instant picture, or map, that captures all of the different angles of light emission at the same time." 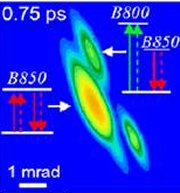 The specific features present on the map allow the team to understand how the electrons in the molecule are interacting. "We spread out the map in a diagonal direction by dispersing the emission and then look at deviations from the diagonal," commented Mercer. "For example, horizontal deviation of a feature from the diagonal tells you that electrons are strongly coupled with each other."

In a proof-of-principle experiment, the researchers successfully probed a common photosynthetic protein called LH2. They are also now studying a polymer-based photovoltaic to see how the electrons inside the system are coupled. "Our technique is instantaneous," concluded Mercer. "This opens up the opportunity to look at small volumes of high-value samples and to get your answer out in one laser pulse."

•  Ian Mercer is interested in hearing from anyone who would like to exploit the ARC technique to study energy transport in other systems. He can be contacted at ian.mercer@ucd.ie