A handheld terahertz spectrometer could be available within two years thanks to ongoing research at the Fraunhofer Heinrich-Hertz Institute (HHI) in Germany. The HHI team's latest breakthrough is a photomixer that takes light at 1.5 microns and converts it to terahertz radiation anywhere in the range of 0.1 to 4 THz. 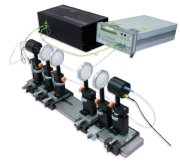 "This is an important step towards our ultimate goal of making THz spectroscopy a handheld technology," Martin Schell, head of HHI's photonics component department, told optics.org. "Having a device that operates at 1.5 microns means that THz spectroscopy can benefit from the volumes and stability of proven telecom technology."

Photomixers that operate at 800 nm are currently available and are constructed from layers of GaAs. Despite the obvious advantages of moving to 1.5 microns (where a wealth of mature telecom products such as EDFAs, tunable lasers and optical fibres are available), replicating the performance of an 800 nm GaAs photomixer at 1.5 microns has been a serious challenge.

HHI's new 1.5 micron photomixers are based on proprietary and patented InGaAs technology. "Any InGaAs photomixer must have both an ultrafast response and a very high dark resistance," Bernd Sartorius of HHI explained. "The key to achieving this combination is introducing photoconductive trapping layers into the structure."

Sartorious and colleagues embedded photoconductive InGaAs material between InAlAs layers. "The essential feature of the InAlAs is the high concentration of deep electron traps," he explained. "Electrons can be captured out of the InGaAs photoconductive layer and trapped within the InAlAs. This increases the dark resistance of the InGaAs. However, the trapping effect only works for photoductive layers with a thickness on the order of a few nanometers."

According to Sartorius, an added advantage of this approach is that the same material system can be used as a coherent receiver. "We now have a complete system," he said. "The same material can be used in both the emitter and the receiver and replicate the performance of GaAs systems at 1.5 microns."

Having perfected the epitaxial growth for its 1.5 microns photomixers, research at HHI is now ongoing to produce a handheld spectrometer that could be used in applications ranging from airport security to quality control during the manufacture of medicines.